-Revisit of A Wrinkle in Time, Josie, and Submergence

A Wrinkle in Time

Director: Ava DuVernay (Selma, Middle of Nowhere, I Will Follow)

A Wrinkle in Time really is a dream project. It took years and years of financial planning to get this thing made, and Ava DuVernay clearly cared about the source material enough to disrupt her acclaimed indie career to do this large blockbuster film. I also want to root for a company like Disney to take risks and adapt these great stories into large films, but there’s a ton wrong with A Wrinkle in Time, and I think it may actually be one of the least engaging fantasy films of recent memory.

Chris Pine is Dr. Murray, a physicist and father who disappears randomly after years of studying gravitational phenomena. His family, mom (the wonderful and consistently underrated Gugu Mbatha-Raw), daughter Meg (Storm Reid) and precocious son Charles Wallace (Deric McCabe), must move on without him. The following year is hard, but everything changes when the children start getting visits from extraterrestrial beings Mrs. Who (Mindy Kaling), Mrs. Whatsit (Reese Witherspoon), and Mrs. Which (Oprah Winfrey). These beings explain that their dad may be alive, but he’s hidden deep within an evil zone of the universe that still needs exploring.

To say this story is an iconic one may be an understatement, and its influence has been felt over young-adult fantasy fiction for years. In addition, its tackling of issues such as space-time and prevailing conflicts in the universe has become a topic of much modern film-making, so it may have been the right time to bring this movie to light. I think the problem lies in the visual execution of some of the ideas. Even from the trailer, it was obvious that this movie was bloated with unnecessary CGI and looked extremely fake.

That initial gut check proved to be true, as there are sequences in this movie that are muddy and gross because of the overtly grey computerized imagery, which are then juxtaposed with uber-colorful scenes that appear to come from a coloring book of a six-year-old. The visual imagery can’t support the story that desperately needs this fantasy aspect. All of the performances are fine (minus Oprah, who spends most her time just floating in the background like a total fool), and there are even genuinely touching parts that arise out of the good/evil story-line. I just can’t help feeling like this is what happens when a studio doesn’t take practical effects seriously enough. 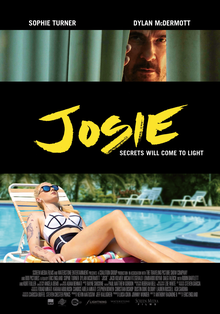 As a huge ‘Game of Thrones’ fan, I do make a point of trying to see the non-show projects of its stars. This led me to Josie, a straight to VOD film about a high-school aged promiscuous teen (Sophie Turner) who moves into an apartment complex alone. The local maintenance guy (Dylan McDermott) takes a liking to her, as does one of her lowlife classmates (Jack Kilmer). As this three-hander develops, we learn that there are pasts between these characters that maybe even they don’t know about.

Josie is a slow burn that never burns, a film that lacks any tension for the first ninety minutes, followed by a five minute reveal that counts as a conclusion. Absent from this film is any real drama or stakes, and we end up instead with a project that never arrives at a destination. It’s not the sort of bad film that’s offensively horrible, but there’s just nothing to this movie. The larger point it tries to make is smothered in a really abrasive final sequence, and parts of Turner’s performance that are somewhat commendable are wasted in a story that we don’t care about.

This is a movie I decided to rent because of how much I really like both lead actors. While James McAvoy is mostly known for his role as the younger Professor X in the new X-Men movies, but his performances in films like Split, The Last King in Scotland, The Disappearance of Elanor Rigby, and Atonement are all really good. He’s actually a really good dramatic actor, and a pairing with Academy Award winner Alicia Vikander is just great. In fact, the film’s first act, where our characters meet and strike up a romance, is quite enthralling. They have fantastic chemistry as they flirt through fantastical locations and talk about their lives. After their vacation is over, their long distance relationship hits a snag when McAvoy’s James becomes a POW and Vikander’s Danielle does a deep dive in a submarine to find more about life in the vast blackness of the ocean.

Each character dives into the filth of their profession to find answers. This gives them punishment and pain, as well as a sense that their fulfilling their purpose. It’s clear that this restraint and difficult choice becomes even harder once they have someone waiting for them on the other side. The romance that commences is really fun to watch, sensual and well-acted. The remaining hour, however, is nonsense.