-Reviews of Jurassic World: Fallen Kingdom, Set It Up, and The Year of Spectacular Men

Director: J.A. Bayona (The Impossible, A Monster Calls, The Orphanage)

The way that audiences were split on the first Jurassic World movie from 2015 will not actually have a bearing on their response to the newest entry of the franchise, a stripped-down and smaller scale dino feature that often feels more like a monster movie than a theme park adventure. The flavor of new director J.A. Bayona is present at certain points, with Bayona’s darker touches and shadowy command of the sets occasionally poking through what really amounts to corporate, conveyor-belt filmmaking. This is a much different movie than its 2015 predecessor, and it’s also a much worse one.

I’m not sure we ever needed to reboot Jurassic Park. It was already a franchise with inconsistent sequels following an initial film which had become a classic. The first film from 1993 remains one of my favorites, but Jurassic World was finally the sequel (reboot) that understood how to make a follow up to such a great movie. It went away from any larger questions or intelligent writing, and embraced being a popcorn movie with the benefit of modern effects. Sure, there aren’t really any great characters, but as a pure spectacle with a central creature that could kill everything in sight, it felt big, fun, and silly. I was okay with that. It might never re-create the magic of Jurassic Park, but it never had to. It could just be entertaining.

This movie is an attempt to speak to larger themes and bring the modern animal rights movement into central focus while still trying to play to director Bayona’s strengths. We spend much of the movie away from the island, instead in a gothic castle with a dinosaur creation even weirder than the Indominus Rex from the last movie. This darker set design is part of Bayona’s imprint, but the movie then is forced to rely on manufactured tension of our characters being locked in an enclosed space with this dinosaur. Scaling down the size and breadth of the film forces us to latch on to the characters and pay more attention to the film’s messages. The problem is that the characters are uninteresting and the script is heavy-handed. You cannot cover up for these faults with an epic scale if the largest thing in your movie is a castle with three or four floors. Jurassic World managed to do it, but its sequel can not.

The main plot-thread of the film is that the dinosaurs are still on the island even after the theme park has been closed. One company wants to sell the dinosaurs to various arms dealers to do what they please, so they bring in animals rights activist Claire (Bryce Dallas Howard) and raptor guy Owen (Chris Pratt) for an extraction mission under the guise of saving the dinosaurs from a soon-erupting volcano. Owen and Claire go along, thinking they’re saving the creatures, but soon find out that the company they thought they were working for has been taken over by greed, and they end up in the thick of this dino arms race. At the same time, their prized creature, the Indo-Raptor (it’s like a leaner, meaner version of the Indominus Rex from the last movie) escapes and begins terrorizing the castle from which the company does business in.

If you’re like me and special effects don’t really wow you anymore, then the look of the Indo-Raptor is less important than the film-makers want it to be. It does look cool, and is a decently frightening creature, but it doesn’t do anything unique or different. The characters are empty, the movie lacks tension, and it completely lacks the wonder that made Jurassic Park so great. I’m sure there are plenty of toys that can come out of the Indo-Raptor, and I’m sure there’s a way for Universal to make plenty of money on this regardless of its quality. Finally, I’m just not sure that there’s anything that progressive about our characters wanting a save the dinosaurs movement through activism. The end of the movie sets up a sequel with disastrous consequences just because these people are unwilling to leave the dinosaurs to die. I’m just not convinced saving them is better, so I didn’t even really buy the movie’s central message either. This movie was just pretty joyless.

I usually only cover select Netflix releases, but there’s been a little bit of internet craze over this one. I gave it a chance partially because of the buzz, but also because of lead actress Zoey Deutch, who I’ve consistently stated is due for a hit. She’s a really good actress and she’s really good here. This movie, although silly and often contrived, respects the drive of a young person in a new career field and respects sympathizes with the difficulty of networking and making a name for yourself.

Two twenty-somethings assistants (Deutch and Glen Powell) are overworked, overlooked, and trying to find a way to slow their lives down slightly. When they have a chance run-in with each other, they start a friendship, concocting a plan to make her boss (Lucy Liu as a sports publication editor) and his boss (Taye Diggs as some sort of executive) start dating. Their hypothesis is that if their bosses start spending some time together, they, in turn, will get more free time.

Playing match-maker, it turns out, becomes a full time job for these two, but they discover over time that the match which should be made is actually the two of them. Deutch and Powell’s chemistry powers this movie, and its silly plot all the way through. Its contrivances and occasionally insincere drama are usually bolstered by a follow-up scene that feels revelatory and intelligent. As I stated before, the script respects the desires of our young characters and wants them to be career oriented. It doesn’t make them seem weak or goofy by putting up with as much negativity as they do.

By the end of this, especially after the bedroom pizza scene, I will be surprised if this movie isn’t the sort of cozy romantic comedy that sticks around in your head as the months go on. Netflix is made to watch on the small screen, on your couch with another person. This movie is the perfect example of what take-home movies are supposed to feel like. 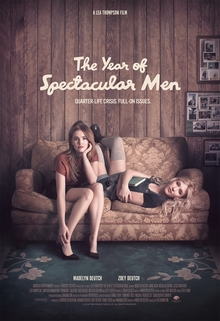 The Year of Spectacular Men

The Year of Spectacular Men is basically the all family-operated McDonalds franchisee of a movie. Written, directed, produced, and starred in by mom Lea Thompson (80s and 90s starlet turned wise mother) and her two daughters Zoey Deutch and Madelyn Deutch, this movie operates in a way that seems pretty close to home. It may not reinvent the coming-of-age wheel, but its background makes it interesting enough to recommend.

Madelyn’s Izzy struggles in college, loses her long term boyfriend and isn’t sure about what direction she wants her life to go in. However, she has a younger sister (Zoey’s Sabrina) who is a successful internet celebrity/model/actress, adding even more to the anxiety. Sabrina is kind enough, and wants to help her sister, but only is sympathetic to a point. Izzy traverses this interesting part of her life over the course of a year.

This movie is derivative and seems like it’s been done better countless other times, see Lady Bird. However, Madelyn Deutch gives a good lead performance in convincing us that she really is this character, and we all understand her life being in constant flux with anxiety about her purpose and anxiety about relationships. My proudest compliment to this movie is also its weakness, as it is directed swiftly enough to avoid the pitfalls of useless mumblecore (having Zoey’s large personality helps avoid that), but the pacing and lack of focus in the film brings up similar issues to this dramedy sub-movement. If a film like Lady Bird is the kind of modern dramedy that gets the best out of mumblecore, then The Year of Spectacular Men is its derivative lessee, borrowing the strong personalities and performances but lacking a central pace or structure. Overall, this is another film worth watching on the small screen, but probably not worth seeking out unless it appears for free somewhere

Next Week: Ant-Man and the Wasp, Sicario: Day of the Soldado, and The First Purge