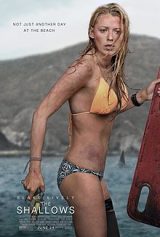 -An almost irritatingly good-looking movie is brought down by a watered-down final act.

In the pristinely shot and incoherently written The Shallows, an 80 minute struggle for survival would’ve been enough, but this is Hollywood, and we must bog down a good-looking shark thriller with a back story about whether or not our heroine wants to be a doctor or give up on medical school. I don’t think we need the silly intro and laughable end scene about family ties and future plans to make Blake Lively likable in her struggle against the shark.

The mother died of cancer, the father is disappointed in her in and out attitude about medical school (no one gets through med school with this attitude), so she runs away to go surfing on her mother’s favorite beach in Mexico. “She” is Blake Lively’s Nancy, a resourceful and gorgeous mid 20s muse for cinematographer Flavio Labiano. This beach is gorgeous and known for its solitude, so she hitches a ride there and starts catching some waves with the few locals that are hanging out there. Her little trip starts to go a little poorly after she encounters a great white shark’s feeding ground near a dying whale. She’s bit and swims to safety on a small rock about 200 yards from shore. With nothing but her resolve and intelligence to get her though, she must survive this wildly vengeful shark.

In any shark movie, I’m willing to bypass the issues of consistency in the shark’s behavior. It’s tough to say why this shark focuses on her instead of the whale, and why he remains stationary just waiting for her for much of the run time, but in the interest of fairness to the movie, I was willing to let it thrill me despite this, and it did…slightly.

It’s directed by Jaume Collet-Serra who crafts the opening like its a music video. The scenery is so glamorous that we don’t mind some of the extended shots that really only accomplish the images of beauty, without actually relating to the story. A few ham-fisted “put down the cell phone and enjoy the forest and beach” scenes turn into close up shots of Lively in a bikini or her chest hanging out of a water suit. The music has a “house” undertone while she surfs, and we even get shots of her in slow-motion going over the waves. This was actually the best part of the film for me because it was so flamboyant and obviously pinned on Lively’s sex appeal that it seemed as if it wasn’t going to take itself too seriously. So despite a few self-serious plot moments, I was enjoying the sheer imagery of the 20 minute opening.

The attack is then pretty strongly rendered, and we set up our film of Lively traversing obstacles to survive this circling shark alongside an injured seagull that she affectionately calls “Steven Seagull.” Hilarious.

Lively hasn’t really had a break-through performance in the film industry. A few of her indie outputs: Savages and Hick ran a little flat, while her starring vehicle from last year The Age of Adaline is infamously terrible. None of that is her fault however, so we remained hopeful that she would excel eventually. Here, she does. This is the most satisfying Blake Lively performance to date, not counting her small part in Ben Affleck’s The Town.

She sells the physical turmoil that she’s in with emotional clarity and weight, and a few “talking to herself” lines feel cringe-y and unnecessary. She would’ve been able to sell this entire film without saying a word, which is a real testament to what she does here.

The cinematography is brilliant. The underwater ocean photography is completely gorgeous, settling on a very vibrant color palette that really aids the film. This all culminates with a jellyfish scene that was astoundingly beautiful. It maybe looks a little too good, based on the grittiness of the story, but I would chalk up the visuals as the film’s best quality, along with Lively.

The problems arise after we’ve fallen in love with the location. Although it is paced well, her incessant talking to herself and exaggerated moments with the shark just never really build the tone of peril that the film needs to pull the style off. Then, the ending is a complete departure, and ventures into SyFy channel dialogue of her trying to shoot the shark with the flare gun and yelling “fuck you!” Man, it really runs off of the rails, and then when the conflict is resolved (when you see it, you’ll know what I’m talking about), it feels so anti-climactic that it should’ve been entirely restructured. It’s fun for what it is, but it’s definitely style over substance.

One thought on “Film Review: “The Shallows””