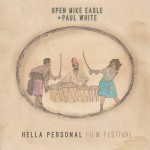 – A witty and colorful offering from one of hip-hop’s most unique MCs.

On “Hella Personal Film Festival,” LA based abstract rapper Open Mike Eagle casts himself as a person who notices, and gets excited about, the little things in life. On the hilarious “Dang is Invinsible,” Mike enthusiastically raps: “Woke up without a hangover!/That burrito worked…” (With an inflection like he’s surprised that he woke up hangover-free.) On “Check to Check” Mike notices how addicted to his phone he is, and on “Leave People Alone” he asks you to know who your local representatives are. If these lines tell you anything, it’s that “Hella Personal Film Festival” is a pretty quirky, sometimes esoteric, but most importantly, fun album.

Part of what makes it so fun is the fantastic production from Paul White. Throughout, White backs Eagle’s raps with funky, soulful, and off-kilter samplescapes. There’s jazzy guitar on the opener “Admitting the Endorphin Addiction,” ragtime piano and whistling on “The Curse of Hypervigilance,” and spaced out pop on “Dive Bar Support Group.” The beats are consistently melodic and memorable and would honestly make a pretty beat tape by themselves, but to just make them shine even more, Open Mike Eagle comes through with an amazing performance.

Like I indicated above, Open Mike is an observant, quiet guy. He’s not spittin’ BARS; he’s got a soft voice and an openly non-threatening mic presence. But what he does have is incredibly sharp, witty lyrics with topics ranging from drunk escapades on the laugh out loud hilarious “Drunk Dreaming” to race on “Smiling (Quirky Race Doc).” On the latter Mike goes into detail about how people look at him differently in public because he’s black. (“Today I saw a lady say hi to a stranger/and then avoid my eyes like I’m a white person strangler”). Even on a serious song like that Open Mike infuses it with a blunt and sarcastic comedy that isn’t too different from a skilled stand up comedian. He acknowledges flaws in himself and society but with subtle, clever jabs instead of hamfisted statements.

I’m not trying to portray “Hella Personal Film Festival” as strictly comedy, as many tracks deal with darker themes like the aforementioned “Smiling (Quirky Race Doc)” and the addiction themed opener. It’s not all goofy and silly, but with the bright and melodic beats and Open Mike’s subtle wit, this album couldn’t help but put a dumbass smile on my face. Throw this on on a sunny day and you’ll get good vibes, guaranteed.