Indie Double Feature: “Eye in the Sky” and “Midnight Special” 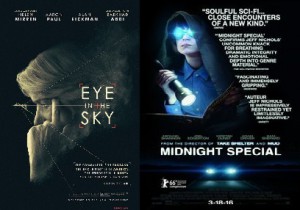 -A wonderful political thriller with modern implications and a messy sci/fi adventure that drags in the third act.

Our first indie is a British political thriller that plays with one of the most interesting concepts in international relations currently: that of the drone strike. In the United States, we tend to be a bit looser in the qualifications that are necessary to conduct a drone strike, but the Amendment 4 and 5 challenges that exist because of possible dual citizenship for those that we hit pops up in Eye in the Sky, where a group of government personnel, some military, some not, have to make a decision to strike a house that is obviously about to engage in terrorist activity. Within that house is one woman with dual British and Kenyan citizenship. The Brits work alongside the Americans to decide what is necessary, and to cut down on all possible collateral damage.

The Americans supply the plane and the pilots (an excellent Aaron Paul and a wonderful Phoebe Fox), while the Brits argue the political/social ramifications of extra deaths as a result of callousness. Helen Mirren plays the Colonel who is authorizing the strike, but when legal ramifications get in her way (a small girl named Alia is selling bread near the strike zone and they want to avoid killing her), she must appeal up to the General (Alan Rickman) who is sitting with the attorney general (Richard McCabe), among others. Barkhad Abdi appears as a double agent on the ground in Kenya, as well as Iian Glen as a minister.

While the whole film portrays just one drone strike and one decision, the clashing of different ideologies and responsibilities make for such a tense experience. It’s shot pretty beautifully, outside of a few sub-par CGI shots of the drone itself, and it’s hard to fault a pretty low-budget film for that when some of the other technology used is perfectly rendered. The performances are high class, and the moral ambiguity of the decision that’s being made is a perfect testament to how relevant this is in politics currently. Although Gavin Hood has had a spotty career as a director thus far, this film is exactly what kind of contemporary war film we need.

Eye in the Sky

Midnight Special, however, is not as taut and well rendered as Eye in the Sky. In fact, much like 10 Cloverfield Lane, this film takes an interesting science fiction/thriller concept and doesn’t do its due diligence in resolving the questions or third act conflict. Despite a perfect cast, the film under-uses its actors in a slow-burning fugitive film that never really figures out what it wants to be. It’s partly a slow-paced film about our main characters being chased, but so many of the interesting questions that the film presents have not been properly explained or dealt with by the time that the film concludes. Even though the end might not be what you expect, it isn’t much of a twist, but rather a let down that the conflicts don’t resolve with any kind of urgency.

The film details a young boy, Jaden Lieberher, who is on the run with his father, Michael Shannon, and father’s friend, Joel Edgerton. They have systemic stops along the way that help them get to a certain location that the film builds to. One of the stops involves the biological mother, Kirsten Dunst.

It appears like the young boy named Alden has special powers, and his ability to hear radio/satellite signals has the government after him, worried that he could be a potential weapon. In addition, the ranch that they lived on in Texas seems to view him as a Christ-figure or savior, so they’re chasing after him to, trying to get the family to return home. It’s a chase away from the authority and toward a hidden place for the family, with the government in tow. Adam Driver is also a part of the cast.

The problem that permeates the movie is its lack of focus. Even though the concepts are interesting and the actors are great, the screenplay is a mess and its insistence on subtlety downplays some of the more action oriented elements of the plot. There’s not really a reason to have such a strange concept and then execute it under a muted gaze. Director Jeff Nichols, of Mud and Take Shelter, does not seem to have the same flair that made Mud one of 2013’s best. Once everything ends and the third act is over, the only response that will come from the audience is: “huh. Okay.”

And for such a unique concept, a lack of enthusiasm is extremely detrimental.