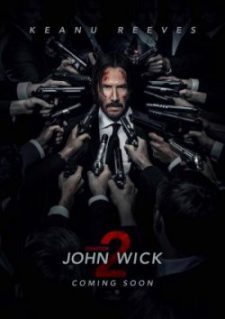 If you thought the first ‘John Wick’ had a lot of bloodshed, gear up for a more action-packed, blood-filled installment, with a more grizzled Keanu Reeves than ever before. Made by the same team, headed by stunt-man turned director Chad Stahelski, John Wick: Chapter 2 features the same kind of excellent gun-play and style that made the first one so special. That’s not to say it doesn’t occasionally suffer from repetition or implausibility, but it still is arguably becoming the finest action franchise we have. With a third movie on the way, you can sign me up.

John Wick himself is an interesting character, still grieving over the death of his wife and the re-entry into the hit-man universe from the last film, but it’s not the characterization of him that makes the universe so special. In my own humble opinion, the set pieces, fluidity of the shots, and Keanu are all just bonuses to the interesting world-building that occurred in the first film. That’s the real catch about these John Wick movies, the universe is really special.

We re-enter the world a short time after where the first film picked up. John Wick (Keanu Reeves) is taking out the remaining men of the Russian mob he decimated last time to get his car back that was stolen early in the first film. After that, we meet Santino D’Antonio (Riccardo Scamarcio), an Italian mobster who helped John accomplish his ‘impossible task’ that gave him leave to forget his violent past and marry his now deceased wife. John gave him a blood oath that is consummated in a ‘marker.’ He asks John to assassinate his sister (Claudia Gerini) so that Santino can take her place on the “High Table,” a council of crime lords who run the assassin world John is a part of. John initially refuses, but under dire circumstances, accepts the assignment. The problem is, Santino wants to tie up any loose ends after the job is complete, so John may be on borrowed time. Ian McShane returns as Winston, the Continental Owner, John Leguizamo returns as mechanic Aurelio, and Lance Reddick returns as the Continental concierge. Other actors like Common and Laurence Fishburne make appearances as well.

Just as with the first film, the sound design and cinematography just amplify the vision that Stahelski and his team have for these movies. They understand how to make an action scene look great, and they understand how our eyes follow each individual person. We are able to keep our eyes on John Wick and watch him through each and every stunt and maneuver. It’s impressive not just because Keanu Reeves does most of his own stunt work (we knew that from years of watching him, he’s a veteran now) but also because they refuse to play into the modern style of frantic filming that dominates action scenes now. Fight scenes can be energetic and powerful without requiring an unsteady (or shaky) camera. Add a little bit to your budget and cast an actor who cares, the final product ends up with a film like this or like Mad Max. A few of the sets, including another club scene and a tunnel/catacombs scene, are completely lavish and intense.

My complaints with the film really have to do with the slight over-staying of its welcome, and with the continued universe building. There were spots (including the shots in the trailers with the secretaries) where the writers made the universe much too broad. Part of what made the first movie’s universe so wonderful was that it felt small and self-contained. Only a few assassins would be in the city at one time, and they all knew the rules and knew each other. That is violated when every other person that John comes across actually knows about this universe. Outside of a VERY eerie final shot (you’ll know about how paranoid it makes the viewer when you see the movie), this overstatement of the universe and its rules ruined some of the authenticity and style that the first film brought up. I was okay with having it be small and non-dominant. How many trained hitmen do we need in New York City? Other issues, like the ‘High Table,’ the ‘Blood Oaths,’ and the way that contracts on people go out are forgivable, if not a bit sillier than how mysterious the introduction of the currency and the Continental were last time. I just wish they were a bit more restrained. That restraint could be hand-in-hand with some of the action sets, such as the hall of mirrors at the end. It just is paced a bit poorly and certain scenes overstay their welcome.

Now, this shouldn’t (in any way) give the impression that I didn’t fully enjoy this movie. I LOVE the universe and I loved the first film. I just can’t, with certainty, say that I felt this was as good as its predecessor. It was in style, and the action was filmed just as well, but I can’t say that the intrigue and surprise of the first is replicated entirely. It’s almost as good, but instead of branching out and doing something different, they really just double down and muddy the waters of what was already created. On its own, this would be a special action film, and would deserve high praise for its ideas and production, which is why the score below is so positive. As a sequel to the impeccable John Wick, it serves as a bloated cousin that gives us all of the same substance, but not quite the same intrigue or surprise.