Indie Double Feature: “The Edge of Seventeen” and “Moonlight” 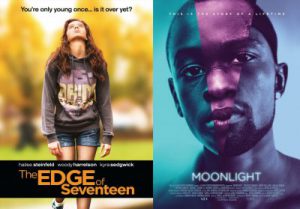 -A comedic, wondrously exaggerated look at the struggle of being a teen, and a gorgeous film about finding a place in the world against all odds.

The Edge of Seventeen, despite being a completely modern tale of what being a teen is like in this era, feels old. Perhaps it’s that we haven’t really seen a film that treats the teenage years with such a mixture of drama and cutting-edge raunchy comedy since the great films of John Hughes graced the screen now 30 years ago.  That’s not to say that we haven’t gotten good teen films. We have, and director Richard Linklater has made sure of that, but Kelly Fremon Craig (with her first time directing a feature length) has really tapped into an 80s style of dramatic comedy that puts to shame so many of the lackluster teen films of recent memory.  It just feels like its been a good year for vintage, throwback-style comedies with other outings like The Nice Guys, Everybody Wants Some, Hail Caesar, or Florence Foster Jenkins. I’m definitely not trying to represent that this is the best movie of that grouping, but I’m not going to say that it isn’t either.

After disappearing from the film world, Hailee Steinfeld has come back out with another fantastic performance, possibly even displacing the star-turning performance with 2010’s True Grit with her move in this film as a teenage girl who is completely down on her luck. Her problems are both beyond what normal teenagers go through and outside of what normal teenagers can control, but there’s a bit of Steinfeld’s Nadine in everybody. She gets jealous, she’s awkward with the opposite sex, she talks too much, she dresses poorly, she’s self absorbed, she fights with her mother, she fights with her sibling, she doesn’t have enough close friends, she’s experienced a tragedy. All of these at once may not apply to you, because this movie sure heaps the pain and embarrassment of teenagedom on Nadine unlike any other, but I’m sure at least one of them applies to you. Male or Female, Gay or Straight, White or Not, there’s something in this film for everybody. The trailers may make it seem like this is a girls-only-at-the-movies type of ordeal, but it really isn’t. In fact, so much of it is introspective that it may be better for adults who reflect on their more formative years more than it is for teens.

As I stated above, Nadine (Steinfeld) is not loving high school. Her wonderful father has passed away, and we catch her at possibly the lowest point in her life. She’s friendless, because her lifelong best friend Krista (Haley Lu Richardson) has started dating her popular, soccer-star older brother (Blake Jenner), causing a rift between them. After her father’s death, her mother (Kyra Sedgwick) has not really gotten back on track, and as Nadine spends every day in a worse state than before, her only solace comes from a teacher with who she develops a bond (Woody Harrelson). The tagline for the posters works for me, so I’ll use it. “You’re only young once, is it over yet?”

All of the performances are really solid. We begin with a disdain for Blake Jenner, who begins to showcase a true emotional arc, along with Nadine, her mother, and Krista, resulting in a four-way character growth that very naturally moves from place to place. It’s the type of film where every event has a very predictable result, but because of great writing and good performances, we very naturally move in the direction of falling for the movie’s dramatic steps. It’s very easy to enjoy a film like this if you let it manipulate you, and because of the really powerful attempt to find a piece of Nadine that works for everyone, director Kelly Fremon Craig has made a timeless teen movie that could end up being a movie that gets more and more popular with age.

Moonlight might be our first true Best Picture contender that has come through this season, and it’s completely worth most of the hype that it’s gotten. It’s one of those films that if you’re involved with seeing as many movies as you can or involved in making predictions for all of the major awards, it’s one of the true heavy hitters of this Oscar season. This happens partly because it carries a really strong social message, but the film also is astoundingly pertinent and directed with a true eye for detail.

Our story, if you can call it that, is built up of three parts, each focusing on our one character at three different periods of his youth. Our first is “i. little” where Chiron (Alex Hibbert) is a child of about 10, running from several bullies outside of his school yard and eventually into a neighborhood overcome with drug traffic and crime. He is rescued by Juan (Mahershala Ali), a kind but fierce drug dealer who takes Chiron to his house and introduces him to his girlfriend Teresa (Janelle Monae). Chiron won’t talk to them in the beginning, but he eventually opens up to them to have pseudo-guardian who helps him get away from his mother (Naomie Harris), who has begun smoking crack.

We then move to “ii. chiron” which details Chiron’s teenage years (now played by Ashton Sanders) and increasingly close relationship with another boy, Kevin (Jharrel Jerome). His mother has gone off the deep end with drug use, and despite Juan being gone, he remains close with Teresa. Chiron gets increasingly bullied due to his slight frame and growing rumors that he’s gay, which has been questioned since he was little. One bully named Terrel (Patrick Decile) has really begun torturing Chiron, leading Chiron to take action.

Finally, we see Chiron (now played by Trevante Rhodes) working his way through the streets of Atlanta. He has now risen up the drug chain and become a hardened, fit, and reclusive person, really only interacting with distributors who work below him. One day, he gets a call from an adult Kevin (now Andre Holland) to meet up after not seeing each other for years after high school. With these three periods, we really get a slice of life for urban youth and the struggle that some of them go through.

Each of the three different periods in Chiron’s life is filmed through a different lense to give the each a distinct feel. Combine that with a nice score and an editing pattern that is really conducive to the kind of story that they tell. All of the performances are very good, and we really feel the struggle that this character goes through, both inside and out. As his relationship with his mother fractures, our sympathy for his relationship with Teresa is two-fold, at once understanding his feelings, but also feeling pity for the displaced mother. While the script is nothing to fawn over, it really comes entirely down the director, Barry Jenkins’s vision. There’s a distinct style and purpose to a film like this, and it’s one of the most dramatically competent of the year.