Film Review: “The Girl on the Train” 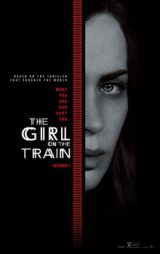 -Although this domestic thriller struggles to be particularly tense or cohesive, it still does manage to be a stylish diversion for a fall afternoon.

Perhaps my most anticipated film of 2016 is The Girl on the Train, a glamorous domestic thriller with blockbuster intentions that has dominated televisions and websites everywhere with a fantastic marketing campaign that made this movie seem literally like the second coming of Gone Girl. If you listened to my audio review in our weekly film column, I talked about how “The Girl on the Train” book is very much a product of the environment that Gone Girl set upon its surge to popularity. Now, we finally get the release after months of anticipation, seeing if it could break into Oscar consideration or possibly become an extremely beloved mainstream thriller.

The result, however, is a pretty large misfire. Things about this film totally stand out, and deliver on some of the promise that we had hoped for, but there is also plenty wrong with this movie, making a majority of this film’s run-time a completely dull experience, riddled with cliches, easily seen twists, and an overly sexualized plot that would be better received on the Lifetime Channel. I saw this a few days ago, and took until today to write my review because of how upset I was. I almost needed time to put this into words that expressed how I felt without being too harsh. This is not a terrible movie. It has many enjoyable moments. It’s just completely short of what it could’ve been.

Emily Blunt is Rachel Watson, a woman in pain to the highest degree. Her ex-husband Tom (Justin Theroux) had cheated on her, leaving her divorced and a shell of what she once was. Her alcoholism has gotten even worse, leaving her alone must nights, unsure of what she had done in previous hours due to frequent blackouts. Jobless and alone, she rides the train up and down the East Coast everyday, spying on the large shoreline houses and the families that live in them. In order to keep alert, she creates lives for the people in the homes, eventually intruding on their personal lives.

Rebecca Ferguson is Anna Watson, the woman that Tom is now married to after their affair become a full-fledged romance following him and Rachel’s divorce. They have a baby, and have been terrorized by a lonely Rachel who has contacted them drunk several times.

Their nanny is Megan (Haley Bennett), a next-door neighbor who lives with her boyfriend Scott (Luke Evans). Megan takes care of Anna and Tom’s baby, but her job has made her depressed, and she seeks the help of a local psychiatrist (Edgar Ramirez). Soon after, Megan goes missing, and we’re unsure where she is and who she’s with…or, if she’s dead.

Rachel may have seen something from the train that night, but she was too drunk to remember. Anna and Tom were obviously in the picture, seeing her everyday, but there are plenty of loose ends that Rachel, now with a purpose after months of watching Megan and her ‘perfect life in her perfect home’ decides to get involved in the investigation, led by a ruthless Allison Janney.

The best thing that the film does is how it changes between times and character perspectives with relative ease. Our three narrators are the three lead women, Rachel, Megan, and Anna. As we unpack their histories, their motivations, and their inner-thoughts, the story of Megan’s disappearance begins to peel back additional layers, all to a conclusion that you may have seen coming. The narrative structure is swift and well-supported, and the plot backdrop to The Girl on the Train is one of the best pieces of the film.

The other great part is that the performances here really work. Emily Blunt re-ups her great run of performances after Looper, Into the Woods, and Sicario with career-best work here. We also get a strong performance from two rising actors in Haley Bennett and Rebecca Ferguson. It’s a pretty great start to Bennett’s career as a lead, and the performances do carry this movie into acceptable territory, despite deeper flaws.

The largest issue comes from the directing and screenwriting, as Tate Taylor does nothing special with the material to make it explode off of the screen. Many of the shots, colors, and backdrops are dampened and ugly, and never really aid the feeling that the film wants to get. A lot of mystery can be gleaned just from good shots and telling the story through visual cues, but that is absent with the direction here, where the production often feels completely bland an uninspired. The trailer was cut as to make this seem like a very stylish movie, but it isn’t really, and this is evident from the very opening shot of the film. It definitely doesn’t have the crispness of a Prisoners or Gone Girl, like it clearly should have.

In terms of screenwriting, there are a few scenes with strong dialogue, but most of the lines delivered by the actors are pretty bare-bones and only slightly passable. There’s not a lot of hidden meaning and richness to the dialogue, unless delivered by Haley Bennett, so the mystery doesn’t come from the script either. If it doesn’t come from the visuals or from the screenwriting, where does it come from? The answer is that it never does. We wait, wait, wait, and wait for this to really rope us in with some powerful storytelling and we remain on the periphery, like we’re the girl on the train pretending that the movie we’re watching is much better than it actually is. This is an ugly, uninspired, overhyped movie with a handful of good performances and a set-up that could’ve been made into something truly great. Although a slightly passable movie for a two hour time in the theater, any time a movie could have been truly great and settles for mediocre, film-goers just become more jaded.

Director: Tate Taylor (The Help, Get on Up)