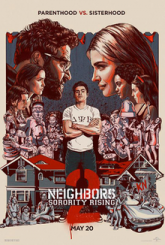 -A socially driven party comedy that improves upon its predecessor.

The entire film’s ideas come from a little known fact that sororities cannot throw parties but fraternities can, forcing the women to mix with the frats to live in the college experience. One of our leads, a youthful freshman named Shelby (Chloe Grace Moretz) realizes this fact and ceases to rush a sorority, instead forming her own with the help of her two friends (Kiersey Clemons and Beanie Feldstein) with the idea of empowering the female image of college, a stinging indictment of college rape culture and unfairness in the ‘greek’ system.

Our sympathy starts with them and the film’s message, but even the sorority tends to party a little too hard for their middle-aged neighbors, Mac (Seth Rogen) and Kelly (Rose Byrne), who are about to have their second child and need to upsize their house. With it held in escrow for a 30 day waiting period, they’re horrified when the new sorority built on partying and being free of expectations moves next door to them. The sorority raises money by partying, and uses the help of former frat leader Teddy (Zac Efron) to help them become situated. When they deem him unnecessary, Teddy teams up with his old rivals, Mac and Kelly, to bring down the sorority and save the deal for their home.

It’s actually Zac Efron himself that has the most to work with here, in terms of substance, and it works. He pulls off someone who has graduated and become lost in his own life. Without the fraternity, his other brothers (Dave Franco, Jerrod Carmichael, Christopher Mintz-Plasse) have all moved on, leaving him without a real full-time job or any prospects. He joins up with the sorority in the hope to rekindle some of his former glory, but has to eventually grow up and mature, making the main subplot of the film about his personal growth. Efron has become a force in the comedy genre, and this is another affirmation of that fact, as he continues to turn in good performances.

Rogen and Byrne do exactly what you’d expect, very similar to their work in the other film, and Rogen (with his normal team of Nick Stoller and Evan Goldberg) has used his writing and likable charm to his acting to continue to stay atop the hierarchy of performers working in comedy today. None of Rogen’s movies are necessarily great, but they’re all good, rewatchable, and funny enough to recommend. This one is no different, founded from a place of social consciousness and satire, and then executed with enough gross-out party comedy that it will rope in both critical watchers and the teen section of viewers that love these kinds of movies. While the first film is based entirely on plot driven element to element, using the rivalry of Efron and Rogen to facilitate the action, this one is more complex, has better characters, and has more jokes written in the dialogue, rather than just being situationally funny. There are problems in pacing, where so many gags are thrown at the wall in rapid succession that film needs to occasionally step back and have a character do a ‘fact dump’ to re-involve the viewers in the plot and not just the hilarity, but it’s a minor problem in the larger pattern of what works well here.

The trailers didn’t sell me on this film, making it seem like entirely a slap-stick mess of movie, but the slapstick occurs mostly in a montage about 30 minutes in, and the best parts come from actual comedy in the writing and subliminal messaging. You may start with watching Rogen hitting a bong and expecting a boring comedy, but don’t let your expectations fool you, it’s worth it.

Director: Nicholas Stoller (Forgetting Sarah Marshall, Get Him to the Greek, The Five-Year Engagement, Neighbors)