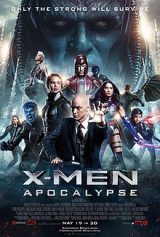 -Over-stuffed, over-matched, and over-produced, X-Men: Apocalypse is the very reason that the hero genre is growing tiresome.

When the climax of the newest X-Men film is happening, you can’t help but remark on how you’ve seen it before: a villain without much character development, sidekicks without much motivation, and a group of scrappy good guys fighting them to the death with tons of grey rubble and fire flying around the digitally rendered set in a massive computer generated implosion that mistakes destruction for creativity. While this film isn’t a total trainwreck, it is certainly a mess, continuing the trend of overstuffed superhero films that incorporate too many characters, too many fight scenes, and not enough true creativity in the narratives. Remember when we thought Spider-Man 3 was bad?

X-Men: Apocalypse uses the First Class and Days of Future Past timeline where our younger mutants (James McAvoy as Professor Xavier, Michael Fassbender as Magneto, etc) are our main characters. As correctly alluded to in the prior film’s post-credits scene, this film deals with En Sabah Nur, aka Apocalypse, the world’s first mutant. With the ability to drain the powers of the other mutants around him to grow stronger and garner more abilities, Apocalypse (Oscar Isaac) was viewed as a God in ancient Egypt, alongside his ‘Four Horsemen,’ powerful mutants who he enhances to do his dirty work. After his supporters turn on him during a ritual that will give him a younger body to allow him to continue living forever, he is put in a coma for a long period of time, over 8,000 years encased in rock at the bottom of his collapsed tomb. Although he is alive, his four horsemen are killed, leaving him alone and betrayed.

Upon waking, Apocalypse is horrified that the world has become the way it is, worshiping, as he sees it, false gods and false promises. Determined to purge the world and build a better one with him in charge as the all-powerful ruler, Apocalypse begins recruiting his four horsemen. The first three that he finds are a young Storm (Alexandra Shipp), the lethal Psylocke (Olivia Munn) and the winged fighter Angel (Ben Hardy). He enhances their powers and sets off to find his fourth horsemen.

Meanwhile, the not-quite-XMen-yet are fractured. Mystique (Jennifer Lawrence) is somewhat of an icon after her work in the prior two films, but she refuses to be a part of Xavier’s (James McAvoy) school that tames the mutants into becoming members of society. Like her old ally Magneto (Michael Fassbender), she believes mutants should fight and use their powers to rule, not to serve side-by-side with humans. This argument of the mutant’s purposefulness is the crux of the entire series, and entire conflict between Xavier and Magneto, despite their respect and near friendship with each other, their ideologies differ severely.

Mystique brings a new mutant she finds, Nighcrawler (Kodi Smit-McPhee) to Xavier and the other main teachers/members of the school, including Beast (Nicholas Hoult), and Havoc (Lucas Till). The school has been beneficial to the kids’ learning to properly control their powers, and the school also has recently admitted a young, but unpredictable Cyclops (Tye Sheridan) and the powerful psychic Jean Grey (Sophie Turner). When Xavier’s old flame (Rose Byrne) a CIA researcher into mutants, shows up with information about what’s happening with the rise of Apocalypse, the team of mutants, soon to be the X-Men go to check it out.

Our final arc deals with Magneto, now living in seclusion with a wife and daughter. He remains out of the spotlight following the deathly events in the prior two films, and just wants to be left alone with his family, ironically, he works at a factory filled with metal machines. When a mistake happens at work and he uses his power to save someone, tragedy strikes him and he must go on the run again, this time deciding to join Apocalypse as the fourth (and most dangerous) horseman.

If it seems like a lot to cram into one film, you’d be correct. The film itself lacks a second act. The first act takes up about an hour and a half, with very little rising action, but instead a search for the horsemen, Apocalypse’s awakening, the X-Men getting together, and that’s all that happens. The exposition scenes make up about 70% of this film’s events, and when I checked my watch about two hours into this film, I realized that there was 25 minutes left and no actual fighting of conflict had really happened yet. The pacing in this film is so poor that it could’ve easily been split into two movies. Even looking past some of the poor special effects that take place here, with the film unable to find a tone between cartoon and self-seriousness (how many times have we said that in relation to a superhero film?), but it also struggles from a lack of character backstory and motivations. Mystique’s decision-making in this film makes very little sense in connection to some of her other decisions throughout this series, and the kind of film that can correctly make up for these flaws is a film that has excellently framed action and third act. This is also absent from X-Men: Apocalypse.

As I stated in my introduction, there are only so many grey rubble climaxes that I can take over a lifetime. Watching the destruction of an entire city is no longer impressive, and I long for the days of a hero and a villain just going hand to hand against each other. The fighting should be about the externalization of an internal conflict, and I don’t really see how that applies to films like this or Batman v. Superman earlier in the year. Oscar Isaac as Apocalypse is a great idea for a villain; the idea of a God who awakes from a slumber to find the world he once knew completely gone, and he expects to regain his former glory is a good motivation for him. It’s nice to see a film less about the ‘racial undertones’ of this series that deal with incorporation or separation for the mutants. Having a villain with a scope beyond that is refreshing, but that doesn’t mean it has to divulge into a big, city-breaking struggle at the end. It all just looks, feels, and seems so fake, so put-on, and so much of a cash grab that Bryan Singer forgot what it really means to make a good X-Men movie. I sound like an old critic, but these films were better with stunts and practical effects where people fought each other, saw blood, died for what they believed in, not this half-assed destructive trend where every hero film has the entire world at stake. Eventually, the stakes become so high that there are no stakes.

The Quicksilver character is kind-of complete bullshit, I hated the scene where he rescues some folks, it’s like a five-minute (four minutes too long) stretch of him running around and saving people who are barely moving because of his superpower. This cartoon interlude where Apocalypse is ready to take over the whole world is really unwelcome, and it’s as if Singer decided to throw in another scene exactly like his introduction in Days of Future Past just as fan service.

Isaac is good as Apocalypse, the film’s failures, and Apocalypse’s for that matter, do not rest on his performance. First of all, some camera angles to make him appear larger than the other mutants would have been nice, he seems so small and insignificant in this, especially when Olivia Munn is basically as tall as him. Without a threatening presence, or a really fleshed out plan, his character doesn’t really work, even though the opening ancient Egypt scene and some of his “we’ll build a better world” rhetoric really works. The way the film cuts from scene-to-scene of him recruiting the horsemen is tedious and boring, and it often feels unnecessary, adding extra run time to an already bloated film.

If there is one thing that works, it’s the fact that we get to see the X-Men again. Hero films like this will always be slightly enjoyable because of the world that they take place in. It’s still nice to see Fassbender as Magneto (his scene where he’s in Poland, hiding, is the best sequence of the movie) and I loved the introduction as Sophie Turner as Jean Grey. She has a wonderful presence on screen, and she steals the show in this. When she becomes important to the plot, there’s some enjoyment to be had.

One last thing, the Wolverine cameo sucks, and is maybe the silliest scene that’s bathed in self-seriousness. He’s got this fucking contraption on his head that makes it look like an 80s spoof, it’s awful.

PS- Just as a qualifier, I really like both X-Men and X2: X-Men United.

X-Men: First Class is my favorite.

And I did enjoy Days of Future Past, even if it was a little messy.