Film Review: “Teenage Mutant Ninja Turtles: Out of the Shadows” 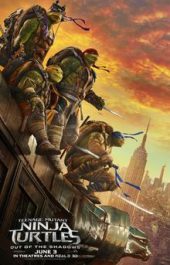 -This messy headache of a movie only has fleeting spots of excitement before barreling into catastrophe territory.

It seemed like there was no way there could be another ‘TMNT’ film after the complete abomination that was the 2014 film, a reboot of the classic Turtles timeline that won every child over in the 90s. It’s hard not to be nostalgic about the old cartoon and the classic 1990 film, even if the latter doesn’t hold up in the same way in today’s world. Now, with the Turtles being owned by Nickelodeon, the same situation has presented itself, where a popular cartoon lends itself to a live-action film. The results aren’t quite the same.

Michael Bay, director extraordinaire, was one of the “visionaries” behind the look and feel of the original 2014 reboot, directed by Jonathan Liebesman; the cast has returned for the sequel with Earth to Echo‘s Dave Green at the helm. The ‘Bay’ nature in this film is a little less noticeable, as it’s obvious that the production team took fan complaints into consideration and tried to make this as much about classic throwbacks to the TV series and comic series as possible, and in a way, it has made the final product slightly more desirable. Many reviews will point out that this is an improvement over its predecessor…okay, granted, but what are you really saying?

Many elements of this 2016 sequel are very much like the 2014 reboot: the villains are stupid, the turtles are annoying, the action is shoddy at best, yet, it is an improvement based on its attempt to recreate the loving nature of the cartoon and original films.

We start with the turtles (Pete Ploszek as Leo, Noel Fisher as Mikey, Jeremy Howard as Don, Alan Ritchson as Raph) creating an arrangement with Vern Fenwick (Will Arnett) that allows him to take credit for the turtles saving the world from Shredder in the previous film. With Shredder (Brian Tee) now behind bars, some former associates in the Foot Clan decide to break him out of police custody, along with current allies BeBop (Gary A. Williams) and RockSteady (Stephen Farrelly). Leaving behind a disgraced police officer Casey Jones (Stephen Amell) in their wake, the Foot Clan rescues Shredder with the help of portal technology developed by the still-human Dr. Baxter Stockman (Tyler Perry). The plot thickens when Krang (Brad Garrett), a brain-ish tentacle creature with robot capabilities contacts Shredder and lets him know of his plan to take over the world from the Dimension X. Tony Shaloub returns as the Turtles’ sensei/father Splinter and Laura Linney plays a police chief. Megan Fox allies with the Turtles as April O’Neill once again, also.

The struggles of this film lie separately from the first one. While the first movie had no sense of fun and the lore of the comics was completely absent, the film-makers did everything they could to put as many references and throw-backs in this film, trying to make an infectious sense of action-comedy that would make the movie immensely watchable despite its flaws. To its credit, that does happen in a small sense. While BeBop and RockSteady remain really, really annoying throughout the run-time, there is an action scene partway through that works when they fight in a river, and it’s true that the film is self-aware. There are fun points in this movie that exist despite of itself.

The rest of the film, however, is entirely flawed and immensely messy, a migraine of a film that struggles to retain any bit of coherency. The good will Tyler Perry built up in Gone Girl is entirely gone, girl, because he turns in a shaky, mumbling, basement-dweller performance that doesn’t contain any nuance or necessary comedy to work. While we’re open to letting BeBop and RockSteady get away with awful jokes, one-liners, and overall sense of bullshit, it’s harder to do so with a live-action actor who is trying to do something different with his performance. I’d be willing to accept the plot that the film puts forth, with Shredder discovering the ooze technology and using BeBop and RockSteady along with the Foot Clan to really work his evil plans of city-wide domination, but they make the ooze technology come from Krang himself, who delivers a lack of intimidation, but rather a complete mess of a voice-over, robot combat performance that draws at your inner ear like a sharp needle trying to deafen you completely. I love Brad Garrett, but this is so, so, so awful.

Without a good villain or even a cohesive villain plot, it’s up to the Turtles to save it. They try to grapple with the “what if we were humans” subtext, but it falls flat, as we don’t know enough about the Turtles or Splinter, but rather being cardboard cut-out characters. It’s a really, really inexcusable motion to dampen the Turtles importance in their own film.

Teenage Mutant Ninja Turtles: Out of the Shadows (2016)