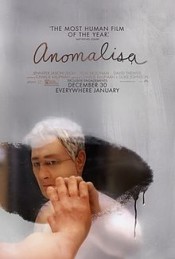 If Anomalisa has a point, it’s about how to some, we’re all the same. Our protagonist looks out among thousands of people at his speech, and all he can see are people that all have the same face. He goes to a new city, and they all have the same voice. It’s as if no one really exists, but instead is stuck in a mundane lifestyle where nothing changes and nothing is exciting.

Director and writer Charlie Kaufman has played with these themes before, most notably in writing himself into the excellent Adaptation, a film I recently got to finally watch. With Anomalisa, however, the black comedy that was evident in Adaptation is gone, and although the animation is really excellent, it’s hard to describe reasons to really like this film.

Its themes are existential and brilliant, and the animation, as stated before, really is refreshingly put together, but it’s hard to establish any sort of rooting interest or love for a character, even though the ‘Kaufman twins’ in Adaptation or Jim Carrey’s Joel in Eternal Sunshine of the Spotless Mind have a level of eccentricity and charisma to them, whereas Michael in Anomalisa really doesn’t.

Michael Stone (voiced by David Thewlis) hears the same voice and sees the same face in every person (Tom Noonan) he meets. His life has become meaningless, not connecting or recognizing anyone around him. His world is shaken when, on a business trip, he meets Lisa (Jennifer Jason Leigh), a woman with a different voice and uniqueness that shakes his world. I won’t spoil the end, but that’s the part of the movie that really shook me.

What I think is missing from the message in this movie is that every person feels that way sometimes, that their routines are boring or that they have similar conversations with people over and over again, and maybe that’s part of the point, but it’s a bit self-indulgent to write a character in whose entire existence is seeing everyone as the same but painting himself as a pseudo-celebrity for being different. It gets in the mind of its main character, but its dour tone is relentless, and it’s hard to imagine Kaufman, who has been quite self-indulgent before, to include everyone in this “Fregolian” delusion, when instead he’s probably pointing out the uniqueness to his misery. I’m just not sure if I buy that, and there’s a level of ignorance and pretentiousness to this story that is bothersome.

Even despite my perceived faults with it, it’s worth noting that its still an excellently made film through animation. The faces are made excellently, and the visuals to the film are done really, really well. Sometimes they feel so close to real-life that they become a little disturbing. This, by far, is the best part of the movie, along with a solid score by Carter Burwell. It’s obvious that there was true art being made with this film, and that the shots must’ve took years and years to compile correctly. It’s just a shame that it was wasted on a premise that feels a bit mundane, instead of maybe the main character’s viewpoint of his own life.