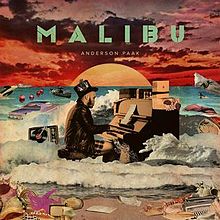 Anderson .Paak has been steadily building his hype for a couple of years now. His 2014 effort, “Venice,” gained him a little bit of buzz in the West Coast soul, R&B, and hip-hop scene, but his features on Dr. Dre’s “Compton” from last year really expanded his visibility. All of a sudden people like me were anticipating to see where his next effort went considering he got such a huge cosign. So, now “Malibu” is here, and the majority of people love it, and Paak is slated to be a pretty big breakout artist this year. But to these ears, this album can’t help but sound a little disappointing.

I can understand why people really like this, though. It’s certainly a well made album, with lush production, good vibes, and strong singing and lyricism. These characteristics are definitely on display in tracks 1, 2, and 4, with the opener being the most outwardly catchy and smooth song here, the second track being the most fun with the Yoshi sample in the background, and the two part “Season | Carry Me” being pretty ambitious. (And the second half is some of the best music on the record.) But after these songs, things dip a little in quality. It’s not a massive nosedive, and there isn’t one “bad” second of the album, but it’s all just a little boring to me. It’s all just pretty decent, and just drifts into the background, never really reaching out of the speakers and grabbing me like it should. And to me, this is strange, because it features a lot of ideas and qualities that I usually adore. For one, it’s a sunny R&B and Hip-Hop tinged album, which rarely ever fails me, it aspires to groove like a D’Angelo album, the production is detailed, and Anderson exudes a lot of confidence. However, none of these qualities really reach the levels required for me to really get into it. It’s sunniness is lost on me in the dead of winter, the grooves are somewhat head bobbing but never fully engrossing, the melodies aren’t particularly catchy or memorable throughout, and Anderson’s confidence isn’t exactly contagious all of the time. (Aside from when he drops lines like “Gather round hustlers, that’s if you’re still livin’/and get on down before the judge give the sentence” like they’re nothing.) So this ends up being an album that aspires to reach a lot of sweet spots for me, but rarely does.

However, I think this could be due to timing. An album like this, that has inspired comparisons to Frank Ocean’s summer classic “channel ORANGE,” probably isn’t meant to be heard in cloudy twenty degree weather. Maybe giving this album some time and listening to it sunny June could open up a whole new world of enjoyment. That’s what I’m hoping at least, as I’m person that very much believes in listening to albums in the right frame of mind. But for now, “Malibu” is just OK.