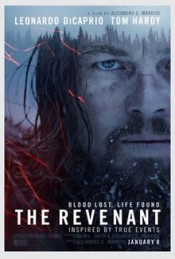 It’s a perfect day to write the review for The Revenant, a film I saw about a week ago and decided to let it sit before doing a traditional review about one of the year’s most grueling movies. It leads all Oscar nominations with 12, and recently picked up three Golden Globes also, showing that although a film like this can have very audible detractors, normally, movie fans soak up the kind of work that goes into a film like this.

Now, it’s not fair to pin feelings about the movie entirely on the production. We’ve heard the stories about how much of the day was spent rehearsing and becoming used to the sub-zero temperatures before actual filming could begin in natural light, meaning that only about an hour and a half of actual shooting could be done in a single day. Occasionally the crew slept in tents and consistently relocated to another section of the forest they were filming to get just the right amount of snow on the ground, just the right amount of lighting.

The story is extremely simple for an experimental director like the great Alejandro G. Inarritu, the director of last year’s masterpiece Birdman (or The Unexpected Virtue of Ignorance). The tale begins with a troop of men on a fur-trapping expedition under Captain Andrew Henry (Domhnall Gleeson). They are attacked by a group of Native Americans and have to flee, taking a difficult course back to town without the pelts they need. While on the run, their main navigator Hugh Glass (Leonardo DiCaprio) is mauled by a large grizzly bear protecting her young, and he is very nearly unresponsive with deep cuts everywhere, especially large slash marks through his back. Captain Henry tells two of the men to stay back with him until he dies so he could have a proper burial, and the two that volunteer are the young Jim Bridger (Will Poulter) who is friends with Glass’s son Hawk (Forrest Goodluck) and the short-tempered John Fitzgerald (Tom Hardy) who wants to protect Jim, but also possibly make a run back for the pelts they left behind.

When the cold becomes too bad to last and Natives get closer to where they are staying, Fitzgerald kills Glass’s son and leaves Glass in a grave to die, currently unconscious from the awful wounds he suffered. Fitzgerald and Jim Bridger flee back to the town where the Captain and the remaining living men are stationed.

The remaining two acts of the film are Glass rising from the grave and slowly making his way back, hunting after Fitzgerald who he knows killed his boy. We watch his healing process and journey back in excruciating detail, watching one man’s will for revenge survive the elements and brutal violence from both animals and Natives to get payback on Fitzgerald.

As stated before, there’s a subtext in this movie about suffering for your art. DiCaprio himself has stated that he took a beating doing this movie, and as a vegan, even ate raw bison liver and raw fish to simulate Glass surviving the elements. He gives it all in this movie, and along with Tom Hardy (who has the second most screen time), it’s obvious that there is a level of commitment to this movie that stands above and beyond anything that has come out this year. It was an immensely hard film to make, and outside of a few choices dealing with some paranormal visions experienced by Glass, it’s a pretty perfect movie.

Whenever Emmanuel Lubezki shoots a movie, the viewer has to always start with the cinematography when discussing the film. He’s the best in the business by far and it’s not even close. The camerawork here is much more stable than in Birdman, instead focusing on symmetrical shots through the trees and showing the forest as both beautiful but very cold. Then, when the action/battle scenes do happen, they are crisp and incredible. There are moments and shots in this film where it seems impossible that the effect that was given off could’ve even been achieved in the first place. Alejandro Inarritu goes back to his more existential, depressing days with this movie, but because of the material he’s working with, he keeps the over-plot simple, instead relying on visuals to tell the background information. After a wordy film like Birdman, here, we get a ton of silence.

Leonardo DiCaprio is a career-best in this role. He should’ve been rewarded with an Oscar for The Wolf of Wall Street, but here he shows again why he is one of the best actors in the business. It’s a more physical performance than were used to from him, but he commands every second of screen time that he has. The journey we take with him is astounding, and the small scenes of his excruciating recovery are acted so well by just his body language. Tom Hardy does the same, but we’re used to the animalistic version of Hardy, it’s just another performance in a considerably great run by him over the last two years or so.

Relentlessly beautiful, action-packed, disturbing, and just wonderful, The Revenant is THE movie of 2015 along with ‘Star Wars’ and every second of it is immersive and powerful. It’s two great actors, a great director, the greatest cinematographer, and a great team, landscape, and idea blended together to create a true masterpiece. There’s no question that this should win Best Picture at the Oscars, and there’s really not much of a debate in terms of what movie tried the hardest to be transcendent art. This is exactly what the movie industry needs, an injection of the hardest work possible on a film. It’s astounding how much a three hour movie with no dialogue can have every audience member on the edge of their seat. Its intensity is unmatched.