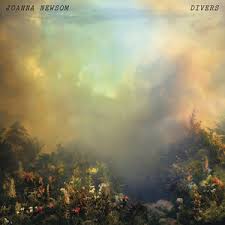 I’m a bit behind schedule on this one, aren’t I? Truth is, I just kept putting off purchasing it because I’m a spoiled music listener who is used to just streaming all new albums. Also, being broke doesn’t exactly help the matter. However, here we are, three months after the album’s release, and after reading people rave about this thing for all of that time, I’ve finally listened to “Divers.” And now, for the rest of my life I’m going to be kicking myself for wasting those three months not listening to “Divers,” because it’s every bit the incredible album it’s been cracked up to be.

Arriving five years after Joanna’s  two hour triple album behemoth, “Have One On Me,” “Divers” feels streamlined in comparison. However this is still a dense album. One or two listens isn’t nearly enough to really digest the music here, as in typical Joanna Newsom fashion, it’s instrumentally off-kilter and lyrically complex. In fact, this whole album is just extremely exemplary of all of the things that make Joanna’s music so indescribably great, and it’s really a combination of all of her albums. The more traditional blues, folk, and country elements of her debut show up here on “Goose Eggs” and “The Things I Say,” the winding harp led lyrical showcases of “Ys” arrive on the transcendent title track, and the jubilant instrumental arrangements of “Have One On Me” are extremely apparent on the strong first half of this record. “Divers” is actually split between heavily arranged tracks in the first half and more down-trodden and somber solo tracks in the second half. It all blends perfectly.

The album does begin somewhat shakily though. The opening track, “Anecdotes,” isn’t bad by any means, but in comparison to the rest of the album is a little tuneless and aimless. I adore the outro and the hook, but the rest of it is lost on me. However, once the second track, “Sapokanikan” comes, the album kicks into high gear and never lets up. This song is just so catchy, both in the kind of bluesy verses and the beautiful hook. (“DOOooOooOo you love me?”) Also, the way she holds out the word ‘gone’ in the outro is absolutely wonderful. This is just a wonderful song, as are the next two, “Leaving the City” and “Goose Eggs.” Both of these songs are wildly catchy, with the former’s almost hip-hop cadence in the hook and the latter’s eargasmic melodic phrasing. Musically, these first four songs are very different, from “Anecdote”‘s ballad qualities and “Sapokanikan”‘s bombastic pop, to “Leaving the City”‘s more sour and dark feeling (exemplified by these grainy horns that pop in here and there that just sound amazing), and “Goose Eggs”‘s country vibes. But it’s all held together by Newsom’s trademark lyrical world that perfectly blends Old World imagery with modern human relationships and experiences. For me, however, this is Joanna’s least lyric-focused album yet. It’s still worth noting and is still obviously fantastic, but here the music and melodies take the forefront instead of brilliant language.

That’s a bit of a misstatement though, as after the wonderful short folky ballad that follows “Waltz of the 101st Lightborne,” we get the most “Ys” like song on here in the title track. This song, like most of the following songs in the second half, is harp-led and much less arranged. Which, in turn, allows more room for Joanna’s lyrics to take hold. And take hold they do, as on this track Joanna conjures up vivid imagery of the sea and ships and shores, and seems to be telling a story of unrequited love.

“You don’t know my name,
but I know yours”

But like many Joanna songs, I could never really prove exactly what this is about. However, that doesn’t take away from how engrossing the song’s words are though, especially when paired with a really beautiful but pained melody.

Most of the second half of this album is pained, in fact. The first half, with its jubilee of harpsichords, horns, strings, and pianos was much more upbeat and sunny, but the closing set of songs is very melancholic. Just take a look at the opening lyrics of “A Pin-Light Bent”:

The closing track is a gigantic ray of sunlight peeking through though. After the preceding harp led tracks, it brings back the pianos and strings and conjures up a really massive sound as Joanna repeats a hook that constantly mentions the “joy of life.” It’s a really climactic and inspiring closer that ends the album the way it began. (Literally, it starts and ends with the same note.)

“Divers” is a transcendent album. It has flaws, and a big one for me is the opener, but I’ll be damned if this wasn’t one of my best musical experiences of 2015. I was actually shaking when this thing finished because it was just so beautiful and spiritual in a way. The music is melodic, dense at times but spare at others, and the lyrics, while less wordy and winding than previous efforts, are still vivid and indescribably meaningful. That’s what Joanna’s music is, it’s indescribable. It has to be experienced, and you’ll probably either love it or hate it. Myself, I’m going to be loving it forever.