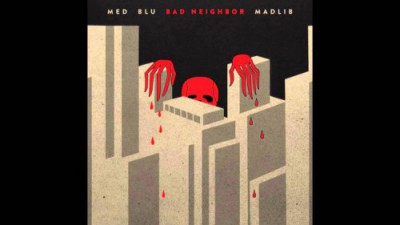 All three of these guys are varying degrees of a big deal. MED, while definitely not a game changer or a legend, is a rapper that is very much worth your time. Blu, while a classic case of “makes a great debut and then falls off afterwards,” that still doesn’t diminish just how great “Below the Heavens,” his 2007 debut with producer Exile, is. And then of course you have Madlib, who is, according to many people, including myself, one of the greatest hip-hop producers of all time. So naturally, this album has been on my radar ever since it was announced, just from the sheer weight of the collaboration. However, while “Bad Neighbor” certainly isn’t a terrible album, it doesn’t even come close to matching the respective artists’ finer works.

Madlib’s major collaborations (“Madvillainy,” “Champion Sound,” and last year’s “Piñata”) were all very refined works. “Madvillainy”‘s all-time greatness goes without saying,  but all of Madlib’s records behind other rappers, whether they be MF DOOM, Freddie Gibbs, or Dilla, see Madlib take his signature crate-digging, oddball, dusty, and slightly psychedelic beats and warp them to fit whatever rapper he is producing for. That’s one of the reasons these albums are so great. However, on “Bad Neighbor,” we don’t really get that. First of all, Madlib’s beats here aren’t great and don’t even nearly match what he did last year on “Piñata,” and there is none of the connection between rapper and beat. This is in part due to the mastering, which cranks up the beats to the point where the rapping sounds unimportant, but this is mostly due to the fact that the rapping is unimportant. You’d be hard pressed to find many other major hip-hop releases from this year with such consistently uninteresting rapping. Blu and MED, along with their slew of guest rappers, don’t do anything special lyrically here. Nothing they say, or how they say it, stirs up any emotion, provokes thought, tells a cool story, or provides anything memorable or worth listening to in any capacity. When pretty much anyone raps on this record, you’re free to zone out, because all these guys are doing is filling space on Madlib’s beats. The only saving grace here is MF DOOM, who finally comes through on “Knock Knock” with a recognizable (duh) voice. He’s someone you want to pay attention to. The rest of the time though, the rapping goes in one ear and out the other, which is a one-way ticket towards a sub-par rap album.

While the beat work here isn’t Madlib’s finest, it is still good, and throughout, Madlib acts as the savior of this record. The rapping is quite boring, but at least you have the beats, which are Madlib’s style to a tee, so if you’re a fan of his soulful, jazzy, dusty sound, then you shouldn’t hate this album. But there’s a fundamental flaw presented here. Like I said before, this record is mastered so the beats strongly overpower the rapping in terms of volume. This not only makes the rapping less memorable and the individual rappers sound less distinct (because they all get washed up in the sound), but when the beats aren’t really that good, and they’re the major thing you’re listening to, there’s a problem. “Bad Neighbor” just ends up sounding like a big mess, and not in an endearing way. A few refinements to the levels on this thing though, and we could be looking a slightly different story.

For all of its flaws, “Bad Neighbor” still isn’t bad through and through. Madlib’s beats, while not exactly his best stuff, are pretty reliable, and there are some good songs to look out for here. “Serving” has a pretty catchy hook, the Dam-Funk featuring “Peroxide” is pretty wild, “Streets” has a crazy beat, “Knock Knock” has nice DOOM verse, and “Drive In” is a good slice of soulful hip-hop production. But there are a lot of other songs here, and ultimately, the majority of them end up boring because the rapping is uninteresting, and the shoddy mixing doesn’t even allow me to try to focus on the good in the rapping. So we’re left with a mess. But it’s a somewhat passable mess nonetheless.