Film Review: “Ghost in the Shell” 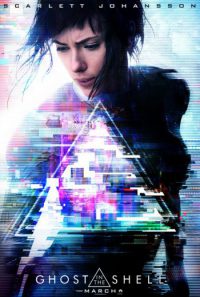 – While Ghost in the Shell possesses a nice group of visual motifs, the style is completely outweighed by a messy script and inconsistent narrative.

The balancing act that occurs between weighing positives in production value and negatives in script writing and presentation really depends on the viewer. For many, Ghost in the Shell, with its unique visual palette and top notch intrigue, will be one of their favorite films of the entire year. However, for many, the inability of the film to capitalize on its uniqueness to reward the audience with a truly enriching dramatic experience may be enough to turn more than half of the audience off. The mixed reviews on this really make sense, there are some things here that are special, but there is plenty of substance that remains messy.

Our story is an adaptation of the Japanese manga of the same name (also a critically acclaimed 90s anime), which stars Scarlett Johansson as the Major, a genetically engineered robot with a human brain. She, along with her partner Batou (Pilou Askbaek), run Section 9, a counter-terrorism police network that is being targeted by a cyber terrorist (Michael Pitt) who has a connection to Section 9’s use of human/robot fusion. With her old life beginning to poke through her hardened, robot exterior, the Major begins to hunt down any forces that oppose their organization, with Juliette Binoche starring as her doctor.

The Major is described as the best of her kind, a true robot/human fusion that takes all of the cybernetic body enhancements but has a human brain to lead the other robots. The society, much like Logan actually, contains people who believe that having cybernetic enhancements of certain limbs, etc., which leads to better combat ability and better performance in everyday life. So, as we look across our fictional, futuristic town learning about the universe, we see pretty outright changes to ones’ body that are very acceptable in this new universe. It’s surprisingly eerie.

The universe is the best part of the film in terms of what the film can do to get the audience fully engaged. The film manages to make Scarlett’s Major immensely likable, clearly using pieces of the anime to fuel her character in the live action setting. We all know from the Marvel Universe that her stunt work is good, but the ability to use her in a darker setting helps this movie immensely. Because the script has an inability to develop all characters other than the Major, we latch onto her scenes as much as we can, and as she learns more about herself, we begin to really sympathize with her as a character because of all she’s been through. I don’t want to entirely spoil who she really is (obviously whenever a character is 80% machine, there’s some kind of explanation), but there’s something special about pieces of her character and what her motivations end up being.

So, while the universe building is beautiful and the Major is a nice character, the film really struggles with its action sets and with its plotting. The most notable flaw, which keeps the movie from being a positive recommendation, is the inability for the film to really recognize its villains. We start with the cyber-terrorism plot, but it changes more to a Bourne-esque espionage style, and not once during the run-time of this movie did I really feel invested in how the story would unfold. The opening was a bit confusing, where the organizations the Major is involved with tend to seem like blank slates, and any twist that involves her allegiance ends up falling flat because it’s impossible to become invested. The movie attempts to be one that blurs the line between right and wrong, but it never really inspires the kind of special inner dialogue about character choices that is necessary for the themes to really hit. Further, none of the supporting characters, short of Binoche who’s great in everything, aid our perception of the Major and this universe, and it comes off as yet another movie that has an inability to develop its supporting players. The occasional boredom, mixed with the immensely grey color scheme makes the entire project overly bleak, and the occasional giddyness over a nice shot or an interesting robot design isn’t enough to pass this movie. It’s unique, sure, but lacks the requisite elements that a sci/fi-action movie needs to succeed beyond the average threshold.

with: Takeshi Katano and Chin Han