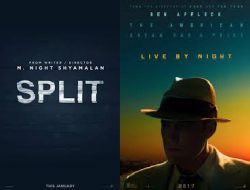 It’s hard to imagine starting January with a film that already could be looking toward making my year-end list for 2017 (I’ll have 2016’s out in the next week), especially because of the January calendar being a place to dump movies that studios don’t really want. The fact that Split is a really good movie is a complete anomaly, but it counts as further evidence that M. Night Shyamalan has gotten back to making movies that are more in his wheelhouse after such bombs as After Earth, The Happening, Lady in the Water, and The Last Airbender. This and The Visit from two years ago are both solid horror/thrillers, and there’s some plot development in Split that was truly outstanding.

Our plot details a really bizarre kidnapping. Three of the main characters are all teenage girls toward the end of their high school career: the shy and reserved Casey (Anya Taylor-Joy), the pretty and popular Claire (Haley Lu Richardson), and Claire’s best friend Marcia (Jessica Sula). They all are at a gathering together when they are drugged and kidnapped by a mysterious and clinical man (James McAvoy). They soon realize that the man who took them isn’t just one man, but rather a series of personalities that express themselves at different times, one a 9 year old boy, one an old lady, one an OCD janitor, one an artsy hipster. There is one common theme, however, for the kidnapper’s personalities who cause him to suffer from multiple personality disorder…they believe in another personality that lives inside them: The Beast, a savage who needs human sacrifice like our three girls.

Shyamalan paints our understanding of the capturer through his therapist (Betty Buckley), and a lot of the movie working to make the 20-some personalities that live within the character seem believable is actually an understanding of the syndrome itself. It never seems distasteful, and when the twist ending (that isn’t really a twist if you’ve seen the trailers or posters) happens, many will feel that it’s a departure from the rest of the film, but I, personally, was fine with the more supernatural ending that the movie takes. I would agree that the third act here is the weakest, but it’s also when the character development of Anya Taylor-Joy’s Casey is finally culminated. I can occasionally be bad at picking future stars, but I really like this Anya Taylor-Joy after this and The Witch.

It’s the build-up that makes the film so good though, and it manages to be very deranged. A scene involving a Kanye West dance is completely creepy, and credit has to go to James McAvoy for portraying this character with such complexity but still making it believable. Split is a great mix of new-age thriller with some horror touches, and Shyamalan has definitely rediscovered his touch.

Live by Night is one of the biggest disappointments of 2016 in film, and it comes cushioned around some of the year’s best because of awards season. Ben Affleck has had such a great career as a director to date but hits a wall with this stale, lackluster, generic crime drama that lacks any urgency or unpredictability.

Based on the book by the great Dennis Lehane, Affleck stars as Joe, a Boston bank-robber (and son of a cop played by Brendan Gleeson) who gets the chance to begin running a prohibition-era rum racket in Southern Florida. His interest with the Bostonian Irish mob boss’s (Robert Glenister) girlfriend (Sienna Miller) has him put in bad shape and hooking up with the Italian mob led by Maso Pescatore (Remo Girone). He is then sent to manage Florida with his old partner-in-crime Dion (Chris Messina) to set up a rum trade an build a casino in a Tampa town full of night life. He befriends the local police chief (Chris Cooper) and his ideological daughter (Elle Fanning) to try to fly under the legal radar as he makes money and plots revenge on the Irish mob boss of his past. Along the way, he meets a girl and falls in love (Zoe Saldana).

The largest flaw with Live by Night isn’t even that it isn’t amazingly exciting. There can be plenty of good crime movies that rely on more of a slow-burn technique, but the problem arises when the plot falls apart. Often you will be in the movie and wonder who a certain character is, or what a specific plot event’s purpose was, but rarely does the film have answers. It plugs along at a pretty average pace, but never settles into its own skin. Affleck himself, as a performance, is average at best, and I’m not sure that this role works for him.

There are good things, however. The costume design is flawless, and the old-car chase scene in the First Act is one of the best backward-looking film touches that I’ve seen.

It’s just that, when you’re looking for the movie to give you solid crime drama pulp or developed characters, it fails. There’s a romance subplot, and one about a religious extremist who undermines the casino operation, but neither go anywhere. It’s not that they are left unresolved, but that they are resolved poorly. The pacing is relentlessly slow, and none of the gunplay is worth sticking around for. Overall, even though there are some decent performances, I don’t even want to think about this movie anymore.