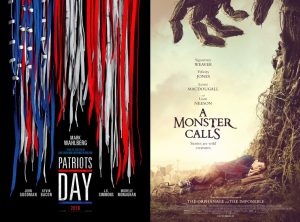 -The latest thrilling film from director Peter Berg and star Mark Wahlberg and a mysteriously unique tale about the fear of loss.

It’s not within my prerogative to talk about whether or not I feel that a true-story movie was too soon after the tragedy and then boycott it in response. Those extraneous factors don’t really matter to me as a viewer, and I had no issue going to see Patriot’s Day in a completely neutral setting and mindset. For what it’s worth, the film itself didn’t seem to cash in too much on the entertainment value, but rather was very respectful to the people involved and was, at least by the end, a very strong love letter to the city of Boston and their communal attitude. It’s admittedly hard to be a big fan of a movie that is making its appeal based on an event that is less than four years old, the natural response is to feel that it’s too fresh. However, for a very specific reason that I want to discuss later in this review, I think it was necessary.

Like the hype about it probably made everyone realize, the film is about the 2013 Boston Marathon Bombing and the police response to the tragedy. We follow a series of characters in a very procedural manner and the story sets up their personalities to later use them as important pieces in the unfolding of all the events. It’s interesting to get introduced to a character and see two scenes with them, not knowing how they factor into the final product, before slipping them into one of the five or six giant events that occurred in some way or another. Our “lead” is Mark Wahlberg as Sgt. Tommy Saunders, heading out to work the finish line at the Marathon as punishment for an infraction he had weeks prior. His wife is played by Michelle Monaghan, who, as a nurse, helps him bandage his hyper-extended knee before spending the day on his feet.

Surprisingly, we also get our sights on the actual perpetrators of the bombing, with Alex Wolff and Themo Melikidze as the Tsarnaev brothers. Other performers include John Goodman, J.K. Simmons, Kevin Bacon, Vincent Curatola, and Michael Beach as various political and law enforcement figures that work in the investigation. The actual bombing occurs in the first act, with the remainder being the fallout and intense manhunt for justice.

Berg has now done three of these ‘real-life’ thrillers in a row, picking disasters and playing their excitement up in a very straight forward and procedural way: good cinematography, building suspense, linear plot structure, and the like. It’s important to note that I was very receptive to Deepwater Horizon earlier this year as well, so if his kind of movies don’t really work for you, don’t be surprised if this just feels like an overcooked blockbuster.

For those who do enjoy this thrilling twist on a really memorable event, the performances are all solid enough to carry the film, and it was nice to get a movie that felt sympathetic toward our men (and women) in blue. The community care-taking is really special in this movie, and by the end, you’ll be shocked at how much you’ll respect Boston. This movie is immensely thrilling and very, very suspenseful.

Everyone deals with grief a different way, but A Monster Calls is among the most special and creative films of its kind in recent movie history. Mixing a live action, scruffy British backdrop with a beautiful grouping of animated sequences may seem odd, but it comes off as one of the most stylish and interesting production designs of the year.

Conor O’Malley (Lewis MacDougall) is a young boy who is dealing with a terminally ill mother (Felicity Jones) whose cancer is beginning to get the best of her. His next guardian in line is his stern grandmother (Sigourney Weaver), with whom he doesn’t have a great relationship, but his father (Toby Kebbell) is a bit absentee. Knowing that his life is about to get very difficult, he is visited by a tree creature (voiced by Liam Neeson) at 12:07am one night, and the monster offers to tell him three stories in exchange for one of Conor’s own. As Conor learns about the world through the monster’s analogizing, he begins to apply it in his everyday life, confronting his grief full on.

The film’s best aspect has to be its production, where we go into the monster’s stories fully animated in a very art-friendly setting. It’s not unlike the cutaways we saw in Harry Potter and the Deathly Hallows Pt. I, but it may even work better here. It’s tough to say that the best performance of the film is Neeson as the monster, but he very well might be; a sturdy presence for all to behold while Conor (a very solid young performer) deals with the increasing tension in his life. Felicity Jones is also incredible, and I’d like to see her in a Supporting Actress discussion a little more.

The film does drag a bit in the end of the second act, mainly because the monster’s third story doesn’t resonate like the first two, and the supposed “twist” about something Conor is hiding never really comes to fruition. However, after the wet-eyed ending and fantastic last shot of a coloring book, you won’t regret going to see this special almost-family drama.