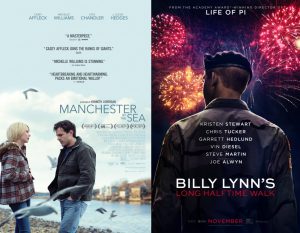 Sometimes a movie gets released that has so much of a real-world feeling that it feels like you’re eavesdropping on other people’s lives or home videos. Manchester by the Sea is one of those movies, a two hour journey into the misery and discomfort of a good-hearted man who has had a world of wrong inflicted upon him, foregoing any typical, brooding style of similar films of its genre to just give the story as it is. It would be so easy to have those extended scenes that they show at the awards ceremonies where the actors are throwing a fit to try to get their “Oscar clip” after their name is announced, or where the camera slowly scales up and down objects to create a silky, upsetting atmosphere like so many of its awards-season brethren. However, Manchester by the Sea, instead, goes full-force into just relying on its writing and its actors to carry the picture. There’re no gimmicks or cliches in this film, and it’s the most dramatically adept of the year.

We open our story with an apartment building handy-man named Lee (Casey Affleck), who has to leave work and travel from his Boston life up to Manchester after his brother Joe (Kyle Chandler) has passed away from heart complications. Lee is obviously a little damaged, short-tempered, and miserable, but the film only slowly fills in his backstory through tasteful flashbacks before returning to the present. All we know at the beginning is that things are not great for him. Despite not really being a part of his brother’s life in recent years, Joe has left him some money, his home, and guardianship of his teenage son Patrick (Lucas Hedges) because of the boy’s estranged relationship with Joe’s ex-wife Elise (Gretchen Mol). After hesitantly deciding to at least care for Patrick until his school year lets up, where he carts a grieving Patrick from hockey, to band practice, to school, to two different girlfriends (in some of the film’s funniest scenes), Lee’s damaged past begins to haunt him, including an incident that changed his life forever, and the re-arrival of his ex-wife Randi (Michelle Williams).

After building up how sad this movie is from beginning to end, it really is worth mentioning that, like real-life, there are plenty of heartfelt laughs in between the grieving and remembrance. This is not a typical film of constant misery where it makes the viewer uncomfortable. It a movie about characters who have suffered real losses, and are hurting just as real people do. Sometimes they let it build up and let it really affect them in a gut-wrenching scene, and other times it turns them butter and angry, but certain characters do a good job keeping the mood a little bit light and getting our characters to laugh. I think that the occasional laughter or awkwardness really adds to when the drama builds, because it has given us characters that are more fleshed out than any characters we’ve seen this year. I love the way this movie is written and directed. It’s gorgeous, smart, and although I don’t know much about director Kenneth Lonergan, he really has made one of this year’s masterpieces. (And there aren’t many this year, that’s for sure.)

The acting, also, is completely astounding. Casey Affleck gives the best performance of his entire career, ousting even his excellent work in his brother’s Gone Baby Gone some years ago. There’s a physicality to his performance that makes it more real, but the emotional range shown here is really, really excellent. It’s a true textbook example of what strong, subtle acting should be. There aren’t any scenes where it feels disingenuous to inspire the “Oscar clip,” but rather just a constant exercise is misery, pain, and healing in a committed way. I really can’t say enough about how strong this performance is. I know a lot of people are saying it’s between him and Denzel Washington for Fences later this year, with the possibility of Andrew Garfield busting in for Hacksaw Ridge or Silence, but I can comfortably say that this is the best lead actor performance I’ve seen so far. We’ll see with Silence, Fences, or Ryan Gosling in La La Land, but I would be perfectly satisfied if this is your Best Actor winner. (I also want to note that Lucas Hedges as Patrick is also outstanding, and that Michelle Williams was decent, but it was a very small performance, so I’d be happy with a nomination, but not a win.)

I really can’t say anything else without spoiling the remaining events, both past and present, that allow this movie to unfold into a complete picture. Just know that there weren’t any dry eyes in the theater I saw it in.

Director: Kenneth Lonergan (You Can Count on Me, Margaret)

Man, it’s hard to follow up such a hit with such a huge miss, especially when it’s from visionary director Ang Lee. Lee has directed a few true classic films like Crouching Tiger Hidden Dragon, Brokeback Mountain, and Sense and Sensibility, and even getting Oscar attention as recently as 2012 with the overrated-but-beautiful Life of Pi. There’s a lot of things about the production of his newest film, Billy Lynn’s Long Halftime Walk, to talk about, but very little to talk about in terms of substance. This is a miss from a imaginative director who will probably rebound in his next film.

There was a decisive production idea in the creation of this movie from Ang Lee that gave him the clearance to shoot the film in 120 frames per second and in 3D to try to make the visuals as immersive as possible. Two issues arise from this specific idea of the new frame rate and such. The first is that only a handful of theaters worldwide could actually show the film in its desired format, and so the entire gimmick that made the film unique wasn’t actually experienced by most of the critics and audiences who saw it. I even heard stories about how critics had to drive extra hours to get to screenings in the single New York theater that had it. I doubt this delay helped the perception of the film at the screening. The second issue is that bad reviews really killed its box office turn out. People are going to be less keen to travel further distances to see the film in an interesting format if many of the reviews say that it wasn’t that great anyway. Certain “event” movies, like Tarantino’s The Hateful Eight or Nolan’s Interstellar that had similar production quirks also had the reviews to back it up. Poor reviews for adult dramas tend to reach the target market, and they’re more likely to ignore it than if a blockbuster gets poor reviews. I’d be surprised if, as I’m writing this, Billy Lynn’s is still even in theaters.

The truth is, even though some of the uniqueness in the production is admirable, the actual movie isn’t really that good.

The performances are all fine, however, with our lead being Joe Alwyn as Billy Lynn, a decorated soldier in his twenties that has become known for saving a troop commander (Vin Diesel) by engaging in a nasty hand to hand with an enemy soldier. Him and his mates are now back on U.S. soil, contracted to do a salute and walk at a halftime performance by an NFL owner (Steve Martin). Their agent (Chris Tucker) is trying to get them a possible book or film deal, while their platoon leader (Garrett Hedlund) is trying to keep them contained and well behaved in a business environment. Billy and the rest of the guys all are on edge, probably from multiple tours overseas, so Billy’s sister Kathryn (Kristen Stewart) is trying to get him to receive an honorable discharge by going in for a mental health exam. Billy also strikes up a fling with a nearby cheerleader named Faison (Mackenzie Leigh). All of these subplot descriptions never add up to much, whether it be PTSD, romance, war scenes, or present drama.

The film looks outstanding, and the frame rate definitely even affects seeing it in regular 2D digital as I did. The high resolution actually hurt my eyes for the first act or so while I got used to it, but once I tried to become immersed in the story-line, the pristine way that it’s shot only gets the film so far. There really is nothing exciting about the way this film is written or acted, and even the war scenes that are supposed to be expressive and exciting feel more jarring than anything due to the tonal inconsistency between those and the lighter scenes. I understand what Ang Lee was trying to do here, but this is one of the bigger dramatic disappointments of the year.