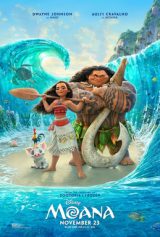 -Disney’s Moana is a beautiful, inspiring, and frequently exciting tale of exploration and destiny.

While these Disney films tend to follow a pretty evident plot structure that carries similarities from movie to movie, somehow, the formula never gets tiresome. Perhaps its the injection of a new aesthetic or feel to the scenery, a new edginess to the main princess character, or just the fact that the plot is bolstered by new songs, but Moana is no exception to the rule… It’s excellent.

Our Disney princess is Moana (Auli’i Cravalho), a teenager preparing to take over for her father (Temuera Morrison) as the chief of their people, a tribe who live on a lone island in Oceania. Ever since she was little, Moana has had a connection to the water, and the tale of Te Fiti, an island goddess whose heart was taken by the demigod Maui (Dwayne Johnson) to give humans more power. Without the heart, Te Fiti has become infected, spreading a black disease over the animals and plant-life in the surrounding islands. Although Moana’s people refuse to leave the sanctity of their island and adjacent reef, Moana knows she must find Maui and restore Te Fiti’s heart in order to save her people’s island.

Moana herself is a fabulous Disney character, where instead of really being a princess, she’s pretty much just the heir-apparent to leadership of her island. She knows that her people used to explore and be more than just a stationary society, so she often argues with her more traditional father, much to the amusement of her supportive grandmother (Rachel House). Her strength and desire for exploration shows both an infectious youth to her character, as well as a wisdom beyond her years. She’s explosive, but not impulsive, and her lead song about the way she interprets her existence on the island, “How Far I’ll Go,” may not be Frozen‘s “Let It Go,” but it’s a damn powerful and uplifting song. It’s also worth mentioning that the complete unknown in Auli’i Cravalho does an excellent job at voicing Moana. There’s a real level of depth to her character that may be predictable, but still impactful.

The supporting characters are more hit and miss, in fairness. There’s no true villain, as it really is hinged directly on the quest through dangerous waters and creatures on the way to the heart. I have no problem with the elements and the components of the journey being the source of driving the plot, however, once we finally get introduced to Maui, he’s a bit underwhelming. It’s not even that he’s lost his magical fishhook or likes to brag, it’s more that the personality of Dwayne Johnson doesn’t always work for this character. As opposed to the sarcastic character we get, a character just a bit more stern would’ve worked better for the production. This isn’t to say that Johnson didn’t do a good job, because he did. I just didn’t love the characterization of Maui, he’s definitely more for kids and less for being a more robust co-lead. The only other character who really didn’t work for me was Jemaine Clement as Tamatoa, the gold-hoarding turtle who gives a song straight out of “Rocky Horror Picture Show.” This scene is a radical tonal shift for the movie, and probably could’ve been avoided entirely.

The real catch for Moana, however, is the actual animation. The water and scenery are so astoundingly beautiful that you feel like you could reach out and touch it. It’s wonderfully realistic looking with up-close shots of the water’s viscosity, and of the nature’s serenity. The peaceful moments are gorgeous and the action moments are fantastic, rendered with true uniqueness mostly, but with one amazing homage to Mad Max: Fury Road that will hit movie lovers in the gut. It’s a great scene.

Overall, the Disney formula is present with Moana, but that’s not really a problem. The scenery, and to some extent the characters, are unique. I found myself marveling at the technical achievement of beauty, and also in enjoying the story-line.