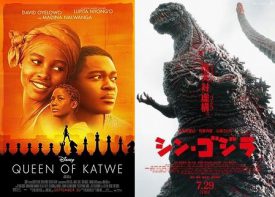 It’s so easy, especially with Disney behind the project, to overdo an inspirational tale and turn it into dramatic schlock, abandoning real world feelings for a pat-on-the-back attitude that can change the entire emotional effect of a story. Rather than being an exercise in execrable drama, this little gem not only garners out sympathy, but proves its point of delivering hope in a conventional, but not overstated, way.

The story deals with a young girl Phiona (Madina Nalwanga) who lives day to day on the amount of money her family can make by selling maize. Her mother (Lupita Nyong’o) is unable to send the kids to school, and unable to hold a proper home for them most of the time. One day, Phiona follows her brother Benjamin (Ethan Lubega) to a local sports/games outreach center that gives activities to the young kids of the slum community of Katwe. It’s run by the committed Robert Katende (David Oyelowo), who teaches Phiona how to play chess. Over time, Phiona becomes the best player in all of Africa, eventually competing in world-wide competitions. The film analyzes her rise from being homeless to being a recognizable champion, and also the in-between where she harbors resentment for her family’s poverty.

It would be so simple for this film to go horribly wrong, but a study director’s hand from Mira Nair and some great performances make Queen of Katwe one of the best straightforward dramas of 2016 so far. While the lead performance from Nalwanga is spotty, sometimes with an excellent emotional weight, sometimes with an awkward sense of misplaced stoicism, the adult actors around her help her to remain in focus as the lead. It’s simple that Oyelowo and Nyong’o are going to be the shining stars of this film, but the help our new lead hold her own.

Both Nyong’o and Oyelowo give emotionally gravitational performances where they’re based on such feeling and implications for their world that we totally ascertain how important the subject matter must be for both actors. The arc of Nyong’o’s character, where we see the mother harbor initial resentment for her daughter leaving and not wanting to help out with the family effort and then eventually become a support base for her success is very powerful. The pain of their poverty and the shame in her inability to properly provide for her children is a fantastic showcase of acting chops. She hasn’t been in much since her Oscar win, so this is a nice reminder of what she’s been up to. Oyelowo, also, gives a wonderful performance, where he takes on these impoverished kids as his own in order to make them into something better. He is able to be a role model for them without the movie over-dramatizing his importance. There’re a lot of layers to his performance as well, where he balances off real job offers in order to stay on with these children, while still trying to support a family of his own.

As a chess lover myself, I would’ve liked to have seen more strategic scenes, but it makes sense that the film-makers would not have wanted to get bogged down in too much detail. (I had a similar complaint about Pawn Sacrifice.) Overall, this is a family friendly movie with some good story-telling. It may seem long at times, due to the movie spanning several years, but its look at poverty and the struggle of the people involved without being too ham-fisted is worth some praise. This was a nice surprise.

The 29th Toho Productions Godzilla film is here, and after several years since Godzilla: Final Wars, we finally get a reboot much like that of Godzilla 1985 or even the original film, where rather than an all-out brawl between Kaiju beasts that captures the attention of toy makers everywhere, we get a return to basics where Godzilla is supposed to stand for an environmental allegory about nuclear war, or in this case, government waste.

As much as I’d like to say that this film is a greatly stylish soft reboot of the Godzilla lore, the end result is actually an overextended, boring, plodding, incoherent, and often laughable mess. Being someone who grew up on the classic Toho films, and seeing them completely become impeccably stylish in the 1990s yields the result of this film leaving a bad taste in your mouth. Among many reasons, the two notable ones are the emphasis on computer effects instead of practical, and the lack of characters to carry the story when Godzilla isn’t on screen.

If you’ve seen the other films, you know the plot, essentially a creature is discovered underwater near Tokyo, he begins to evolve from a serpentine-like creature with gills into a land-ready mammal (this metamorphosis is really, really shoddily done) and terrorizes Tokyo going for the nuclear power plant slightly offshore. Despite the best efforts of the government and military forces, he always seems to repel them, leaving them needing a new strategy.

Godzilla has always stood for the impending threat of a nuclear war in the other films. Then, when everyone started just appreciating his look and typical plot devices, other monsters got introduced in the interest of growing the fan base. This film is more about the return to form for what a traditional Zilla film would look like, albeit a more satirical and fast-paced style than the brooding classics.

The most annoying flaw, and most unforgivable flaw, that the film has is the lack of characters. We open up with the government agencies in meetings to discuss the activity underwater, and this continues all the way until the end of the film. There are so many “political” players introduced, that even at the finale of the film, we still have to get a subtext that lets us know the person’s name, occupation, and place where they are. Because there’s no fluidity or attention to detail in the office scenery, these scenes never become interesting, and because there’s no real characters, we never become even remotely invested in the response efforts. This is not a way to tell a story, to have an hour and a half of your screen time be with people, places, and events that we know nothing about and don’t care about. Talk about strikes one, two, and three.

However, the defense to this is that it’s supposed to show the waste of resources that the Japanese government has in its indecision, and pokes fun at the United States for being able to move unilaterally. There is then a group of characters who begin cooperating in a more traditional sense, and begin devising a real plan to stop the Godzilla threat, not just spinning their wheels in bureaucracy. Point well taken. It still does not change how unwatchable many of the scenes in this film were. It was very fast-paced, with a dry sense of humor to make the audience chuckle about the film poking fun at government employees. That’s great and all, where Godzilla is now the allegory for tearing down the corrupt establishment and putting a new system of forward thinkers in their place (BERNIE, BERNIE!), but we still have to tell a story and have characters. They just are the most robust way to connect to an audience. This whole complaint is enhanced by the lack of interesting cinematography or scenery. The whole backdrop felt very stale. I couldn’t give you the name of a single character in this without resorting to IMDB, Rotten Tomatoes, or Wikipedia. I just couldn’t.

The point about the stale scenery is actually a connection to my second biggest flaw with this…the effects. Many will come to the defense, stating that on a limited budget, the computer effects have only a small amount of wiggle room to be impressive, and they often won’t look as good as an American film. That’s a fine excuse, and I’m not going to flunk a foreign film just for that, but let’s consider the alternative…

In the past, Godzilla was just a man in a suit stomping through city models and fighting other guys in suits. When we look at these past films (especially the 90s model of Godzilla), the practical effects still hold up and look great. In fact, I watched some footage collection of them before doing this review so I could be sure that I didn’t have nostalgia blinders on. Compared to the 90s films, this movie looks like garbage.

The transformation scene from a lizard to a true Godzilla form was really, really problematic, probably from being under-budgeted, but even after that, the Godzilla model and the fights with the army just don’t come off as being as innovative as the classics. It’s probably another reason why Godzilla is barely in this movie, it was probably costly. I remember a time where the costumes looked great. It’s what the fans want to…