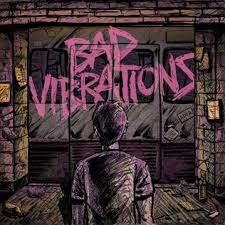 -A Day to Remember return with their shoddiest effort yet.

A Day to Remember do one thing well, and that’s a catchy hook. The amount of A Day to Remember songs that have stuck with me simply because of how infectious they are far outweigh the songs of Blink 182, Sum 41, The Offspring, My Chemical Romance, Fall Out Boy, and many of the other mainstream rock bands I listened to years ago. Not to mention how much my brother (the movie critic here) loves them. So while they’re not a band that I listen to very much by choice, they’ve been a part of my life for years, and I was kind of looking forward to this album.

But I ignored the signs of doom the lead singles spelled out. “Paranoia,” the title track, and “Bullfight” were way darker and less focused on just being fun pop punk songs. And darkness and heaviness have always held A Day to Remember back from being a really great band. Because they’ll pen an addictive pop song and then follow it up with a terribly unpleasant metalcore track. And it’s not like they’re actually heavy and blood pumping songs either, as the production of albums like “Homesick” and “What Separates Me From You” is super brittle, mechanical, and just seriously grating to me. That’s why “Common Courtesy” is maybe my favorite album by them because the production was warmer and brighter, the guitars were gigantic, and the sounds bled into each other making things sound more live and like the band is actually together and interacting as opposed to recording tracks separately. So while the metalcore songs still seemed totally unnecessary when stacked up against pop punk gems like “Right Back At It Again,” at least they weren’t headache inducing.

But the brittle production is back here, so the metalcore songs are as bad as ever. The title track has a decent hook but it’s not exactly worth the mechanical chugging guitars and screamed verses. It just doesn’t sound good to me, at all, there’s no other way to put it. The same goes for “Exposed.” It’s not that I don’t like “heavy” music, I don’t like music that attempts to be heavy and threatening but has a production job that doesn’t allow for it to be anything but grating.

But unlike their other albums, the metalcore songs aren’t redeemed by a solid set of great pop punk songs. In fact, there’s really only two songs here that hit on A Day to Remember’s strengths: “Naivety” and “We Got This.” They’re just absurdly catchy, absurdly well written pop songs that just make me wonder why the hell they bother with anything else. Not many bands have the ability to write a chorus as life affirming and infectious as the one on “Naivety,” and yet they’ve decided to cut back on songs like this to make room for shit like “Reassemble.” I mean, what is Jeremy McKinnon even doing on that track? He sounds like shit! Whereas on “We Got This” he’s the perfect pop punk frontman.

So on “Bad Vibrations” A Day to Remember prove themselves to be one of the most frustrating bands out there. Especially here, as they’re only giving a glimmer of the upbeat pop punk that has filled up their other albums. This darker, heavier sound just doesn’t work for me. Not with this production job, and not when some of the best pop songwriting in the business is right within reach. If only they just reached out and grabbed it.

Standout Tracks: “Naivety” “We Got This”