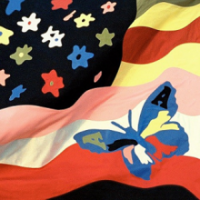 -The Avalanches return from a sixteen year silence with a summertime masterpiece.

I live in a quiet little neighborhood in a quiet rural town in South Jersey. The area is dubbed “The Pinelands,” so naturally, there’s tons of trees and woods. Tons of green. And in my development, that’s especially apparent, as the dividers between houses are just towering trees. And let me tell you, in the summer, this area, and my neighborhood in particular, is absolutely gorgeous. The sun and the clear blue sky seems to bring all of the color out in everything: the trees and the grass are bright greens, the colors on the houses become brighter, the mailboxes stand out, etc. Even the dirt looks nice. And my backyard looks beautiful, what with the sun reflecting off of my pool and the colorful table cloths that sit on our patio table. I can remember being a little kid, and on those hot, sunny summer days, my brother and I would be out playing wiffleball in our backyard or basketball out in the street, my dad would be out working in the garden and by the pool, everybody’s out grilling so the cooking burgers and hot dogs and steaks are radiating up and down the street, and the Phillies game is on inside, and that was back when Philadelphia sports were actually good. (What a mess it is now, though.)

Somehow, The Avalanches have crafted an album that takes me right back to those times. Warm, bright, simpler times. No responsibility, no looming adulthood, nothing. Just sports, music, family, friends, the sun, and my backyard.

What’s funny is that The Avalanches’ debut all the way from 2000, “Since I Left You,” is considered to be one of the ultimate summer albums. And sure, that album is breezy and fun, but I mean it when I say that I’ve never heard an album this carefree and warm and childlike. You remember those moments when you were a kid and maybe your parents took to a really cool and exciting place, and you were just so smiling ear to ear and looking at everything like it’s the greatest thing you’ve ever seen? Like when my family and I went to The Hershey Hotel in Pennsylvania. It was the craziest shit in the world to a 10 year old me. How was there a hotel this big? How could I eat all this candy? How did they fit elevators, an indoor and outdoor pool, gift shops, a game room, restaurants, and rooms to stay in all in one place? I was just walking around happy as shit, completely baffled that this place even exists. That’s this album, for 60 minutes roughly. It looks at the world with this wide-eyed, childlike wonder, cherishing every detail it takes in. And I think that’s because of the music it pulls from.

The Avalanches are still very much the same crate digging, sample colliding geniuses they were on the debut, but the samples they’re using are very different. It’s less groove based, less danceable, more freeflowing, open, and most of all, psychedelic. They’re using a lot of pysch pop samples, and if not, creating psych music from non-psych sources. And psychedelic music has always been known to be childlike and summery, and “Wildflower” embodies that as well as any album I’ve heard. It makes the debut look like “Soundtracks for the Blind” by comparison, which is obvious hyperbole, but the warmness of this album makes “Since I Left You” seem cold by comparison.

And with warmth comes beauty, and boy, let me tell you, this album is fucking gorgeous. And triumphant. And positive. And youthful. And nostalgic. Basically, all of the happy words, you can apply them to this album. And this becomes immediately apparent as soon as the album opens, with “Because I’m Me.” Now, stop right there. What a great song title! So empowering and confident. You could take it as an anthem of accepting yourself, strengths, weaknesses, everything. And what an anthem it is. Not because of any huge Arcade Fire choruses, but because the main vocal sample is just so perfect. “If she don’t love / what can I do? / Just put on my best pair of shoes / Because I’m me.” Fuck dude, these are the kinds of musical moments that save lives. Imagine being sad or lonely or whatever, and then this comes on. And the song’s only just begun, because this sample slowly fades in, and then the music rises and explodes into this exuberant horn led groove. And then Camp Lo spits two verses over it. And it’s not about what he’s saying, this song isn’t about bars. But they’re delivering it with such positivity and finding such a triumphant flow, and if you’re wondering what the fuck a ‘triumphant flow’ sounds like, you’ll know exactly what it sounds like when you hear the song. It’s one of the best album openings I’ve ever heard, up there with the Boris Gardiner sample on “To Pimp a Butterfly,” and ‘Shaolin shadow boxing, and the Wu-Tang sword style…’ on you know what.

There’s actually a number of rap songs on this thing, and they all go over beautifully. You’ve got the lead single, “Frankie Sinatra,” with Danny Brown and MF DOOM (!), which has this playful, circus like bounce to it, with Danny and DOOM just adding to the cookiness of it all. Danny Brown makes another appearance on “The Wozard of Iz,” and spits an extraordinary verse. It’s just so passionate and invigorating. Also on that track, and I don’t know for certain, the man behind Tame Impala, Kevin Parker. He’s in the credits for this album on drums, and you can hear those signature fat sounds that he gets, along with the classic swirling psychedelic effect that he uses so liberally. Let me tell you, that’s the mark of a great artist: when you can pick them out immediately without them saying a word.

Another stand out rap track is the absurd, “Noisy Eater,” with Biz Markie. Filled with goofy munching sound effects and a beat that brings to mind a cartoon bear moseying through the forest, Biz raps about waking up and being hungry. For cereal, something like Cheerios or Cap’n Crunch. (Side note, I basically live off of cereal.) What was at first a total “what the fuck is happening?!” moment in the album just became so loveable and silly. It just makes me feel like a kid again, man. Like I just woke up on a hot summer day, and I’m eating cereal and watching morning cartoons. It’s just so effective at bringing me right back there. What’s more is that the hook is an interpolation of “Come Together” by the Beatles. I used to love “Come Together!” That was one of my favorite songs growing up! Jesus, this album is fucking amazing.

Like, how did they even pull it off? Front to back, top to bottom, it’s perfect. Flawless. Seriously, I’m trying to think of a second here that I didn’t enjoy, and I got nothin’. It flows perfectly, with all of these gorgeous interludes and tiny skits bringing one track to the next, and every song is so memorable. Even the short ones meant to set the stage for the proper songs, they’re all beautiful, melodic, sweet, warm, and just add to the blissful, transcendent vibe that this album has. Transcendent. That’s a word that I use sparingly, but I fucking mean it here. This music shouldn’t even happen. It’s so wonderful and just so perfect, and so good at pulling those emotions out of you that you’ll never be able to put into words for other people. You just hear the music, and you know. I’ve been with “Wildflower” for a few weeks, but I know, and if you experience it, you’ll know too.

Standout Tracks: “Because I’m Me” “If I Was a Folkstar” “Colours” “Zap!” “The Noisy Eater” “Harmony” “Live a Lifetime Love” “The Wozard of Iz” “Sunshine” “Stepkids”