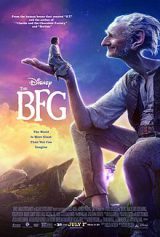 –The BFG is another fun family adventure from director Steven Spielberg.

Steven Spielberg has done it again, creating a wonderfully transportive adventure film for all ages as has done countless times in the past. It’s his ability to make films for everyone that has been his largest success, and The BFG is no different, a funny, adventurous look at a silly relationship between a young girl and her Big Friendly Giant best-friend.

It’s based on a 1982 novel by Roald Dahl, the king of the slightly unsettling children’s story. Because The BFG is not as easy going as a film like Finding Dory, or other conflict-less Disney schlock, this one manages to create a tone of real peril on occasion, relying on the audience to be able to accept a slightly harsher reality when it comes to our main characters.

Our main characters are both misfits. The human is Sophie (Ruby Barnhill), raised in an orphanage after her parents’ death, and our giant is the BFG or “Runt” (Mark Rylance), a giant who swipes Sophie from her bed and takes her to giant country in the clouds. Sophie soon learns that BFG is actually much smaller than the other man-eating giants in the world, and must save herself, while also teaching BFG to stand up for himself against the giants who bully him. Penelope Wilton and Rebecca Hall also make appearances.

Watching this film is a lovely way to spend a summer night, and Spielberg has had a career that is so enriched with developed worlds that look and feel so special. By transporting the audience to a place outside their comfort zone, he allows his films to consistently wow the audience by accomplishing the unexpected. A small scene where BFG gets asked where giant country is results in him pointing about three feet off of the map given to him into thin air. That’s all we need to know, giant country is not human country.

He also is able to find a good tone for the work. The other giants who bully BFG (notably voiced by Jermaine Clement and Bill Hader, among others) are also cannibals, who tease BFG for his vegetarian ways. When they are hunting Sophie, the stakes are very real, but the tone is still playful because Spielberg and his writers (a posthumous credit for Melissa Mathison of E.T. fame) know not to have a film about a CGI giant and a young girl’s friendship be taken too seriously. So when the conflict is “resolved” in the end, it never oversteps its bounds and becomes what it was never set out to be. There are areas for an action scene or two and he, thankfully, refrains from the heading down that route.

Instead, the writing works the plot through a couple absurd scenarios that really deliver good comedy. When the film suddenly becomes a stuffy British comedy for about a 20 minute interval, I was actually howling with laughter in the theater. That and Rylance’s butchering of the English language through his uneducated character was charming and funny. It seemed to me that the film was happy making innocent laughter, never relying on shock or other things to force feed a child’s enjoyment, but instead was content in the atmosphere that Spielberg had created. This is a lovely family film, even if it (very) occasionally drags.