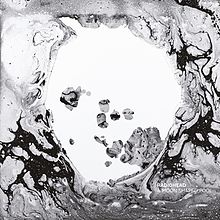 -Radiohead return with a slight and tepid snoozefest.

Radiohead’s album covers have always been a thing of beauty, and they’ve always in a way dictated the mood of the album. “OK Computer”‘s art is distinctly blue and white throughout, exemplifying the chilling nature of the sound, and it’s also full of fragments of posters and self help messages, to signify the critical, sarcastic, and cynical lyrics. “Kid A”‘s art is apocalyptic and ominous, just like the music contained which seems to display the beginning and the end of the earth. “In Rainbows”‘s art is basic, colorful, and nocturnal, just like the “back to the basics” and late night sound of the album. “The King of Limbs”‘s artwork is eerie, nocturnal again, and woodsy, just like the humid and ‘summer night alone in the trees’ feel of the music. Long story short, Stanley Donwood and Thom Yorke have always created the perfect artwork for their albums.

“A Moon Shaped Pool”‘s cover is another example of that. It’s grey, watery, kind of indistinct, cold, and thoroughly boring, just like the music contained within.

Which hurts to say. Radiohead are my favorite band. They’re the most important band to not just my musical development, but scores of other music fanatics across the world. But if I’m being honest, this album really disappointed me.

And I’m certainly in the minority. The critics have fallen head over heels for this, and more importantly, the fans adore it compared to the divisive and highly underrated “The King of Limbs.” Some are saying it’s their best work since “Kid A.” Some are saying it’s their best work, period. Seemingly everybody loves this album. And they’re free to do so; I’m not going to sit here and treat my opinions as fact. But allow me to address some of the praises that have been heaped upon this album.

1. ‘It’s their most melodic album’

Absolutely not. Possibly the best virtue about Radiohead and what makes them such a legendary band is the fact that despite all of the layers of their music, the little sonic details, the moving parts, the experimentation, the emotional weight, etc. if you strip all of that away to just Thom Yorke and a guitar, the songs hold up because the melodies are so strong. Radiohead makes catchy, highly memorable music, and that often gets overshadowed by the other things they do so well. But these are not melodic, memorable songs to me. Piano driven ≠ melodic. Ironically, this is their most stripped back album, with little rock instrumentation and more than a couple songs driven by Thom and a piano, but most of them suffer. I’ll concede that the two lead singles have good melodies, especially the absolutely gorgeous and pained “Daydreaming,” and “Glass Eyes” and “Present Tense” are nice as well, but elsewhere, there are no classic Radiohead tunes. It’s not boring due to the grey vibe of it only, but also because there are very little actual songs to latch onto.

Also, and this isn’t related to melody, these songs don’t groove. Another under appreciated element of Radiohead’s music is how much the song’s groove. “I Might Be Wrong?” “Idioteque?” “Separator?” “15 Step?” “Weird Fishes/Arpeggi?” “Dollars and Cents?” “In Limbo?” “Paranoid Android?” C’mon man. Radiohead have been consistent masters of the deep, hypnotic groove. With these songs though there’s no push and pull, it’s all pull back into a negative space with no forward momentum. And the drums are mostly missing in action, which I’ll get to later. Now, not all Radiohead songs have to groove. I’m not tapping my foot to “Motion Picture Soundtrack” and “No Surprises,” but they had great melodies. But when your songs lack both groove and melody, well, you really ain’t got shit for a song.

Blasphemy. “In Rainbows” is one of the most perfect albums ever made, with ten perfectly written songs, with tons of power, emotion, passion, great melodies, deep grooves, and amazing production. It feels weird to say, but Nigel Godrich, the legend, did a poor job with this album. Previous Radiohead albums have this vast, expansive, enveloping, deep sound that you could dive into and get lost in. “In Rainbows” in particular is so warm and so inviting and just so perfect sounding, with three guitars, grooving bass lines, strings, subtle electronics, and tons of reverb. This album though? It’s cold, claustrophobic, not inviting, not expansive, not “live” sounding, not endless. I have a hard time connecting it to any previous Radiohead album, but the fact that so many people have chosen “In Rainbows” baffles me beyond words. They’re nothing alike.

Radiohead albums have always great drum sounds. “OK Computer” in particular has some of my favorite rock drums sounds ever. So huge, husky, live, and crushing. They’ve always sounded real, authentic, and powerful, in a world where rock bands overproduce the shit out of their drums. But the drums on this album (when there actually are drums) are not overproduced, they’re just dead. There’s no oomph, no power. Listen to “Decks Dark,” and the electronic drums that are so quiet, and so afraid to infringe upon the song, and then listen to the live drums that come in later and add no extra power. It’s inexcusable. Elsewhere, the drums could’ve been way more powerful also, as “Ful Stop,” which has a decent groove, would’ve benefited from a way looser feel. The drum production on this album is just another example of there being no power or push to the music here.

There’s also now low end. Radiohead have always had great bass lines, and beneath all of the layers you could always hear Colin grooving away. None of that here. But it’s not just a lack of bass lines, there just aren’t any deep sounds in general, which is a clear production flaw. Take “Daydreaming” for example, a song I do adore, and listen to the vocal manipulations that rattle and shake the track. Sound good? Not to me. The lack of low end is piercing on this album, and when there are deep sounds, like at the very end of that same track, they’re so muddy and they again rattle unpleasantly. It’s so weird to say, but I find “A Moon Shaped Pool” to be a badly produced.

There are a couple songs here that I like. The two singles are fantastic, “Daydreaming” especially, and I do enjoy the gorgeous “Glass Eyes.” But for every good to great song, there’s others that are frustratingly OK to downright bad. “Desert Island Disk” is a boring, meandering interlude stretched out to nearly four minutes with horrible folky guitars, “Tinker Tailor Soldier Sailor Rich Man Poor Man Beggar Man Thief” squanders its fantastic title by being an absolute non song, and worst of all, they gutted “True Love Waits.” What was once a legendary, emotional, powerful acoustic ballad for the fans has been turned into another cold, grey, dreary, bland, boring drag. The acoustic guitar strumming has been replaced by plinkling keys that barely even outline the chords, and they must have micced Thom’s fingers because you can hear them slapping the keys down. I don’t want to hear that; it’s a hideous sonic detail that does not fit. What they did to “True Love Waits” is just representative of this album as a whole. It’s just boring.