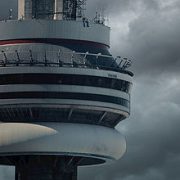 -The most popular rapper on the planet releases a glorious mess.

The cover art for this release sees Drake sitting atop Canada’s CN Tower, and in a way, atop the world. And that’s been the narrative for Drake ever since 2013’s fantastic “Nothing Was the Same.” Sales wise and popularity wise, he is unquestionably the biggest rapper in the world, and while in terms of quality he’s not quite at the top, Drake’s perch atop hip-hop’s popularity totem pole is unchallenged. Since that album he’s had numerous hits off of the huge “If You’re Reading This It’s Too Late” and eviscerated Meek Mill in the highly entertaining, and highly lopsided, beef concerning Drake’s ghostwriting. It’s a testament to how on top this guy is if he can take an accusation, with proof, like that and turn it into a convincing win like that. And throughout, Drake has hinted towards the mysterious “Views From the 6,” now just “Views,” the proper studio album follow up to “Nothing Was the Same.” He’s been all over the place in the past couple of years, so I was honestly at a loss as to where he’d go with his sound. Would he go with the brash trap rap of “What a Time to Be Alive” and “If You’re Reading This It’s Too Late?” Would he go in the poppier direction suggested by “Hotline Bling?” Would he re-embrace the majesty and diverse flavor of “Nothing Was the Same?” Would he go back to his emotional Alt-R&B and emotional rap roots of “Take Care?” The answer is he tries to do all of that, and the result is an 81 minute, bloated, but enjoyable and at times glorious mess.

Going back to the album cover, the cloudy sky behind Drake and the tower actually dictates the mood more than the foreground. There are frequent rain sound effects between songs, the production is cold and icy, and Drake is often conflicted and insecure. This album is definitely best heard in late night isolation, as opposed to his recent focus on bangers. There is an attempt at somewhat of a structure here, with the album beginning in winter, moving to summer, and then back to winter again, but even the more tropical and danceable tracks in the summer section are still kind of cold and Drake still isn’t the ultra confident guy that battled Meek Mill. And this is exactly how I like my Drake albums. Despite being such a huge star, he makes really personal, emotional, and pained music that, more often than not, is for sitting in your bedroom alone in the dark and not for partying. (On his full lengths, at least.) This has gotten Drake a lot of flack over the years, but I’ve always loved that atmosphere, and I love it again here.

But while the atmosphere and down trodden mood is pretty consistent here, the sound and styles presented are not. The opener’s production is string laden and orchestral, heading straight into icy trap on the second track, vintage “Take Care” styled R&B sampling on the third track, dance pop on the fourth track, and trap rap on the fifth track. The summer section is extremely poppy and dancehall inspired, but there is a brash Future collab carcrashed in the middle of it. The last two track where it goes back to winter are also pretty different as well, as “Fire and Desire” is straight up R&B, while the closer is in the same vein as “Tuscan Leather” or “Weston Road Flows,” another song on this album, in that wordy, rambling, majestic rap style that “Nothing Was the Same” sported on plenty of occasions. Needless to say, the concept didn’t pan out, and it leaves the album pretty messy and hard to make heads or tails of. However, that criticism kind of evaporates once you realize that every song is good.

There’s 19 tracks presented here, and there are so many highlights. The opener in particular is incredible in the way that Drake takes a pretty spare arrangement and creates a really nimble melody with wordy phrases, and turns it into something incredibly powerful, and catchy. I bought this album the day it came out, read some of the lukewarm response online, and put it on with somewhat hampered expectations, but as soon as Drake’s slightly autotuned voice came in with that incredible opening melody and lyric: “All of my ‘let’s just be friends’ are friends I don’t have anymore…” I just knew that “Views” was going to be a good album. And after multiple listens, I think it’s a great album. To begin, these songs are some of Drake’s catchiest yet. Hip-Hop definitely takes a back seat to his R&B and Pop influences, so he has to rely on his singing abilities and his melodies, and he delivers some of his best work on both fronts. His singing is smooth, sweet, and explosive at times, like towards the end of “U With Me?” It’s also particularly great when he alternates between rapping and singing, like again on “U With Me?,” coming through with these short melodies that are angelic to the ear for the few seconds he sings them, and then pulls them away. But there are even more songs where he is only singing, and they go over incredibly well. Previously released single “One Dance” has an absurdly catchy hook, “Feel No Ways” is melodic distorted dance pop with beautiful vocal lines, and there are a few songs that he shares with other singers who fit in perfectly. PARTYNEXTDOOR offers a great hook with some falsetto, dvsn (and the late Pimp C) come through on “Faithful,” and dvsn in particular flexes his vocal chops, and the best of all, Rihanna appears on “Too Good,” furthering the narrative of Drake and Rihanna having perfect chemistry together on songs. And that’s just a few songs. Long story short, Drake is singing much more than he is rapping on this album. This disappointed me initially, but when he’s coming with irresistible melodies like these, it doesn’t matter.

When he does choose to rap, though, it goes over well, but predictably well. His singing and pop sensibilities took big steps forward but his rapping is exactly what you expect from Drake. He’s still personal, wordy, rambling, and relationship focused, and in fact all of the rap songs here could have fit on any previous Drake no problem. “U With Me?” is classic girl problems Drake that could have operated as one of the sparer tracks on “Nothing Was the Same,” “Hype” and “Grammys” are bangers that belong on “What A Time to Be Alive,” (and as a result stick out like sore thumbs here, despite being quality songs), and “Views” and “Weston Road Flows” are those autobiographical, sitting-atop-the-throne rambling songs that could close out albums like “Nothing Was the Same” or “If You’re Reading This It’s Too Late.” This may sound like a criticism, though, but it isn’t, because I love the style on those albums, so why wouldn’t I love it here?

“Views” is a hard album to judge. It’s long, messy, and it tries a lot of things. But while it doesn’t come together as a cohesive whole like his best effort, “Nothing Was the Same,” it does come through as a showcase for one quality song after another. I’m more than satisfied with that.