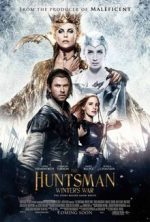 -The only fantasy image this film manages to evoke is you dreaming of leaving the theater.

Some films are just relentlessly boring. Even when they take some of the greatest female actors of our generation, Jessica Chastain and Emily Blunt specifically, this studio-mandated movie that wouldn’t have existed without the success of 2013’s Frozen avoids interesting and eventful like it’s the Zika Virus. Even the stars you showed up to see, like Charlize Theron and Jessica Chastain, spend large chunks of the movie off-screen as the plot is so messy with contrived arcs and prior happenings that they had to pay Liam Neeson to narrate large sections of it so you wouldn’t be so confused that you have to leave. Maybe leaving was the best option.

This film is not necessarily a prequel as advertised. Instead it runs before, parallel, and after the events of 2012’s Snow White and the Huntsman, the overrated mess of a film that made more money than necessary and took home Academy Award nominations in production categories that it didn’t deserve. It’s frustrating when critics call a film like this “visually stunning,” when in reality, it’s just an excuse to say: “well, it doesn’t hurt my eyes to look at it even though the story is lame.” With Universal expected to take a monster financial hit from this, hopefully the Academy doesn’t deem it necessary to rob other films of production nominations for a CGI fest like this. In fact, it looks a little bit like Peter Jackson’s ‘Hobbit’ movies, overly saturated CGI without too many real sets and a bunch of CGI creatures that look awful.

The story is told like this, backtracking from the first one: Ravenna (Charlize Theron), an evil queen, is told that her sister Freya (Emily Blunt)’s daughter has the potential to be the fairest of them all after Freya had a child out of wedlock with a Duke from the kingdom. Ravenna begins plotting, and arranges the child’s death, to the dismay of Freya. Whether the child is actually killed, or whether it is banished and is actually Snow White from the prior film is left to your interpretation, but Freya, unable to kill her sister, flees and establishes her own kingdom far away. The tragedy awakens her power to manipulate ice, much like Elsa from Frozen or the Queen from Narnia.

Freya outlaws love in her kingdom and plucks children from their parents and turns them into a trained army of Huntsmen that wage war on neighboring kingdoms and let Freya’s territory expand, turning forest into ice and snow as her power increases. The two most powerful trainees, Eric (Chris Hemsworth) and Sara (Jessica Chastain), decide to flee after a particularly brutal battle, but Freya tears them apart, leaving Eric to believe that Sara’s dead and Sara believing that Eric abandoned her. Eric goes on to work for Snow White, Ravenna’s replacement as Queen after Snow White and the Huntsman, and then the film then jumps seven years to be a sequel of said film, as the Magic Mirror has gone missing and Freya wants to obtain its powers. When Sara and Eric reunite, there are trust issues, but they realize the importance of keeping the Magic Mirror from Freya. They also team up with some dwarves, most notably represented by Nick Frost and Rob Brydon. Is Ravenna still alive somehow? Is Freya as evil as her sister? Will Eric and Sara reconcile? These questions are sort-of answered in the film.

Does the plot above sound a little interesting? It does right? Sadly, most of this is told through Neeson’s narration and not through the actual story. In actuality, the story is just a lot of walking around and talking between characters. The action scenes are done with shaky camera, and the typical “love is awful” villain comes off as cliched and uninspiring. The lore here could be special, but it doesn’t happen in a coherent manner and Chris Hemsworth is not much of a lead in films. He’s a serviceable actor, but there’s no personality in Eric and Jessica Chastain is wasted. Both also do an awful Scottish accent that breaks every other scene and there’s just not really a reason for most of the events to be narrated when the actual action on screen is mediocre at best. Let me assure you, this film is not visually stunning, it’s not well acted. It’s just boring.