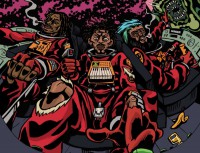 The debut album by hip-hop trio and Beast Coast affiliates Flatbush Zombies begins with a hook that samples lines from their rightfully beloved breakout mixtape “Better Off Dead:”

“Why I feel like the past is catching up to my ass?”

“Everyday, me and Mary Jane.”

This lets the listeners know that this album isn’t going to be too different from their previous tape. The members are still Meechy Darko, the gruff voiced standout member, Zombie Juice, or just Juice, the high pitched faster rapper of the group, and Erick Arc Elliot, the more calm MC and lone producer. Elliot still uses a lot of strings in his beats (though there is more of an emphasis on trap here than there was on “Better Off Dead), and the lyrics are still drug related, hardcore, and grimy. Not much has changed, in fact, many of the characteristics of the group have only gotten stronger. But while that means the strengths have been heightened, the weaknesses have become more glaring.

The biggest weakness by far for me is Juice himself. Meech is a fantastic MC, and Erick isn’t too shabby himself, but every time Juice hops on the mic the album dips severely in quality. For one, his voice is already really high, which isn’t necessarily bad, but during a lot of his verses he cracks and and raises his already high voice to the point where it does become annoying. Also, his flow is noticeably off on a lot of these songs. He clearly fancies himself a fast MC, and references his love for Tech N9ne and Eminem on the opening track, but unlike those guys, he can’t keep his flow under control and in the pocket. Prime example: his song destroying verse on the otherwise good “R.I.P.C.D.” He tries to break into a speedy triplet flow (which even if pulled off wouldn’t sound good), and is rushing so badly that he almost jumps an entire measure. It’s painful, inexcusable shit; the kind of shit that shouldn’t make it on albums. He’s also somewhat rushing on “Bounce,” and while it’s not bad to the unlistenable degree, it’s still noticeable and detracts from the song. And they have the nerve to replay one of his lines at the end of the song, like, “great I get to hear this guy again.” Lyrically, he’s also lacking compared to his counterparts. All three of them rap about drugs a lot, but his come off as way more vapid and way less clever. He has no lines as funny as Meech’s “did so many drugs this year I’m feeling so amazing,” fitting ‘amazing’ to rhyme with ‘Trayvon.’ I don’t want to be overly harsh on the guy, but he stands out as a glaring flaw on this album.

Another gripe I have is with the beats. They’re not bad by any means, but they are kind of one note and not entirely interesting. They’re clearly made strictly as backdrops for the rappers, which is fine… when Meech is one the mic. But when the kind of “in one ear and out the other” Erick is on the mic, they don’t elevate him, and they definitely don’t elevate Juice. The only standout beat I can think of here is “Bounce,” which, per the title, bounces, but even that is mostly due to Meech’s absurdly catchy flow on his verse.

…Which just proves my point with this album. The quality of a song rests solely on Meech’s shoulders. There’s no beating around the bush here; this guy can rap his ass off. His gruff voice and delivery is unmistakable, and lyrically he just throws out one great line after another, like:

To me I sound like a poor black kid from the ghetto,”

“My semi-automatic will splatter a nigga like Jackson Pollack,”

“Run up on me like I’m some hippie nigga

And die under the knife, Joan Rivers.”

And this is just scraping the surface. So many of his verses are filled to the brim with the kind of lines that make you recoil back in your chair. He’s simply one of the best young rappers out right now.

“Better Off Dead” was a much more balanced project. Juice wasn’t as noticeably bad, the production was far more interesting, and even the songwriting was much more memorable. (There’s no “Palm Trees” here.) But while this pales in comparison to that tape, Meech still elevates this album to decent heights.