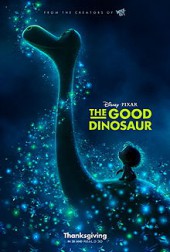 After being literally ripped apart and rescheduled, coming on the heels of Pixar’s home run Inside Out, The Good Dinosaur comes off a bit of the mess that it is. While the world looks fantastic, and features some great Pixar animation, there’s not a heart behind this project that will sweep adults into it the same way that some of Pixar’s best does.

If we picture the best of Pixar, such as the Toy Story series or Wall-E or Up or The Incredibles or Finding Nemo, you’ll notice that the recent string of their films are a bit less easily acclaimed. Both ‘Cars’ movies are not that great, Monsters University was unnecessary, Brave was merely fine, and now The Good Dinosaur continues along this path of mostly mediocrity. It’s more for kids, that’s for sure, and doesn’t pack the same kind of punch for adults that the best Pixar does. For a movie with such an excellent premise, it consistent ploy to remain childish, but occasionally be more violent than most kids movies, creates a clashing tone that I don’t love.

Arlo (Raymond Ochoa) is an Apatosaurus in an alternate universe where the dinosaurs never went extinct. He’s young, but he’s a bit awkward as well, unable to perform the daily tasks on his farm that his father (Jeffrey Wright), mother (Frances McDormand), brother (Marcus Scribner), and sister (Maleah Padilla) ask him to do. When instructed to kill a young human Jack Bright) who is eating their supply of corn, Arlo can’t, causing him and his father to chase after him in the wilderness where Papa meets an untimely end. Arlo gets lost in a flood and has to work his way back home with help from the underdeveloped, dog-like human boy, encountering dangers along the way and trying to find his courage. Notable other voice performances by Sam Elliot, Anna Paquin, A.J. Buckley, and Steve Zahn come up as well.

The morality of the film, focused on Arlo finding his courage but also showing his humanity are important, but because of how much of a mess he is, his character really grates on you after awhile. Learning to overcome fear is one thing, spending all movie running away scared from things is another. The character arc may make sense, but it’s not an enjoyable watch. All of the supporting players are so small that they can’t really save it.

The animation is gorgeous, the backdrops fantastic, but because there isn’t much detail in the actual Dinosaurs’ animation, the silliness of them stands out poorly against the realistic backdrop. This, overall, makes the animation pretty average, and considering the production problems, it’s not surprising that the characters don’t feel fleshed out. Sam Elliot, while welcome in everything, has very little to do with his role as a T-Rex, and frankly, I just wish there was more dinosaurs in this production. There’s not enough to visually feast on to get by after the lack of validity in the story.