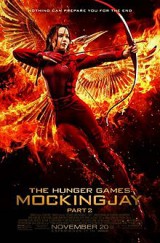 The biggest problem that plagued this film’s predecessor had more to do with the constant repetition than with actual screenwriting issues. It became a near caricature of a dystopian landscape, with several shots focusing on the landing of a technologically advanced helicopter, followed by Katniss and her crew slowly walking out of their ship to reveal a wide-panned shot of destruction. Much of this, showing Katniss interacting with a computer generated environment of literal nothingness, was necessary, but the two-hour plus film was so beat down by its own sluggishness, repetition, and bleak tone, that the normal flaws in the universe became more apparent.

In the first two films, it was easy to not ask questions about the Capitol’s cruelty, or about the Districts’ lack of resolve because we weren’t around them; we were around several young teens battling in a dangerous arena to the death. Now, the Hunger Games are over, and there’s nothing to shield us from the universe and the story behind the ‘Games. The result is an inflated universe that cannot support itself, and while this ‘part’ does improve off of the emptiness of its predecessor, Mockingjay-Part 2 is merely a hollow, down-trodden, and poorly conceptualized story about the harshness of war, and while written for young adults, the mature themes are not properly explored. The entire process of the last two films leaves so much to be desired.

We begin with District 13 and the rebellion’s convincing of District 2 to join them in the fight to overthrow President Snow (Donald Sutherland) because of his near-enslavement of the various Districts that provide goods and services to the Capitol. These exaggerated class divides have finally reached a boiling point, thanks to Katniss Everdeen (Jennifer Lawrence), a former Hunger Games survivor who carries with her a loud mouth and an ability to persuade. Her personality has allowed some of the leaders at District 13 (the hub for the rebellion against the Capitol) such as its President Coin (Julianne Moore) and strategist Plutarch (Phillip Seymour Hoffman) to build her up as the ‘Mockingjay,’ a face and voice for the rebellion after she beat the ingrained system of the Hunger Games with a good shot and quick wit.

After persuading the last bit of rebel forces, the attack begins. District 13 and the rebellion send in waves of soldiers, but Katniss has other plans. She wants to be the one to actually assassinate the evil President. She jumps aboard a crew with some of her best companions to date, such as a few other Hunger Games survivors played by Sam Claflin as Finnick, Jena Malone as Johanna, and, of course, Josh Hutcherson as Peeta Mellark, the boy who competed and also survived the Hunger Games with Katniss, forged a romance based on inner-dependency, and spent many-a-night with her before getting kidnapped by the Capitol and brainwashed into thinking Katniss was the enemy. Without Peeta’s unwavering support, Katniss’s anger and resentment toward the Capitol grows, making her rogue mission of assassination that much more important. Her childhood friend Gale (Liam Hemsworth), now also a warrior, is more than happy to tag along to help.

So that sets the scene. The largest problem that has transitioned from Part 1 to Part 2 is the lack of true direction in the political subtext of the series. The point about class divides, and the working class wanting more recognition compared to the Capitol’s incessant sophistication and cruelty is a ham-fisted attempt to create a political conflict. The universe here, with the Capitol making nothing but weapons, sets up the Districts to have more bargaining power than the series gives them credit for. Regardless of this, the inside of the rebellion in terms of its strategy and leadership are extremely problematic.

Julianne Moore is completely lost here as Alma Coin, the President of District 13 and Madame of the Rebellion. Her own lust for power is obvious from the onset, and her fractured relationship with Katniss is not portrayed in an experienced setting of bargaining for power, but rather in petulance from the two main female characters. Decisions are made on the fly, Coin comes off as fake in every interview, and the overall idea of creating constant commercials of the battles and of Katniss’s actions may be to, in theory, persuade people to join, but in reality, it’s a furtherance of the second main motif of the series which warns us about the dangers of the media in our lives.

The inner-politicking here is disastrous, and with Phillip Seymour Hoffman passing away during the creation of these films, his presence as a buffer to Coin is no longer there, leaving her entirely on her own. The easily predicted twist at the end that leaves everyone with their hands dirty is not a surprise, and just more of the relentless bashing of our heads with The Hunger Games’ large wooden baseball bat of political irony. There’s nothing brilliant or intellectual about what’s done here, so don’t let any fans of the series tell you that Mockingjay is superior because there are politics in it. Remember, Chappie was plenty political, so was Ted 2, but we don’t applaud them for a lack of subtlety, so we shouldn’t do it here.

That leaves us with the remaining two things that could make this work:
A. Craft a great looking war film with suspense and keep us engaged by blinding us to the larger problems with excellent set pieces, gun-play, and action sequences…

B. Make the love triangle work and properly develop the characters. I’ll start with this.

How any film can make Jennifer Lawrence boring is beyond me, but the snarly, witty, oddly sexy Katniss from the earlier films is entirely gone now. What’s left is a bland, personality-less drone that is intent only on killing the President despite preaching humanity, and a character who is not completely aware of the larger political scope that is being cast around her. Much of the film’s messages occur from outside her understanding, and although she is resistant to her use as a pawn in the Rebellion’s strategy, in reality, she really is just a pawn. Her falseness as a leader is not convincing, and while some of the PTSD elements from the last film are touching, they abandon them here, instead showing us a hardened, and frankly stupid, protagonist.

The actual crafting of the war is hit and miss. The idea that the Capitol’s engineers want to use technology and exaggerated forms of killing the rebellion soldiers to continue to appease the people is worth giving a pass. The fact that the Rebellion’s squads can spring traps and unleash a horrific chain of events sent to kill them does provide some tension. Clearly, the Capitol has enough engineers to easily turn the evacuated parts of the city into a Hunger Games arena. This, I loved.

One scene that takes place in the Sewer with a Capitol-created threat to wipe out Katniss’s platoon is really a brilliant scene. Other shots of them in disguise wading through crowds of people during bombs and gun-fire are really handled carefully. It’s clear that director Francis Lawrence knows exactly how to stage a good action set, Catching Fire remains the series’ best movie by far, but there is an over-reliance on CGI here. As the city corroded under fire, the settings got less and less real-looking, which hurt how painstakingly hard the original two films worked at looking authentic. Here, CGI buildings, CGI palances are too obvious to not take you out of the movie. Two or three killer action scenes that dealt with Katniss’s crew slowly working toward the President’s palace while dodging these traps were not enough to save the overall clumsiness of the war narrative.

As finally, as far as the characters, Peeta never showed the kind of personality that Katniss assumes that he did now that he’s recovering from his brainwashing. With Katniss and Peeta coming off so bland, the most interesting character is actually Gale, but we’re never really sure if we want to root for them to be together. It’s hard to take a film with a relentlessly dour tone and throw in warm romantic feelings between the characters. It finally reached that point here, and all I was rooting for was for the film to be over.