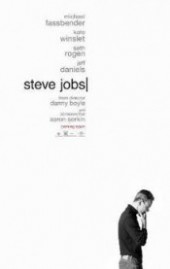 Sitting in a secluded backstage room is Steve Jobs, contemplating his upcoming product launch and changing which Bob Dylan quote he wants to incorporate in his presentation. Maybe he changed the shark on the computer desktop thirty times, perhaps his assistants and employees have bets about what Bob Dylan verse he will finally settle on, and perhaps his only confidant, his best assistant, will finally convince him to repair the relationships that he has broken.

Jobs was a perfectionist, and the new sort-of biopic from Danny Boyle expresses this as loudly as it can. When Steve Wozniak, the co-creator of Apple, asks him what he does at the company, he gives a metaphor about how people can be great at playing their individual instruments, but

“I play the orchestra.”

Michael Fassbender is Steve Jobs in this, he doesn’t play him. Any contrivance about how Fassbender doesn’t look like Jobs is instantly lost, we don’t care that Fassbender isn’t a look-alike, we care how he portrays him, and boy does he. The wide range of Hollywood biopics that litter Oscar season with boring period pieces and over-dramatized character studies do not affect the team of director Danny Boyle and writer Aaron Sorkin. The effect here is felt in an energetic, moving film of great proportions, quick dialogue, and is over before you even have time to check your iPhone for important texts.

The film itself is plotted around three major product launches.

The first: the initial launch of the Mac in 1984 while Jobs is panned for a controversial piece in Time Magazine after refusing to admit his paternity of his daughter Lisa (Mackenzie Moss) and having a cold attitude toward his former love and Lisa’s mom Chrisann (Katherine Waterston). The Mac is a bit overpriced and eventually fails.

The second: the launch of the NeXt computer, a bloated release that seems only to get struggle Apple jealous enough to welcome him back as CEO. Embattled current owner John Sculley (Jeff Daniels) is on the way out after the flop of the Newton. Jobs has severed his relationship with co-creater Wozniak (Seth Rogen) and there remains complications in his relationship with his daughter and her mother.

The third: the successful re-launch of the Mac in 1998, while the father/daughter relationship take center stage after his daughter, now in her teens (Perla Haney-Jardine) has taken tuition money for Harvard from former engineer Andy (Michael Stuhlbarg). Jobs attempts to rectify the situation before the launch, while he has confrontations with Sculley and Wozniak all over again.

The emotional core of this film is expressed by a main assistant, his Polish-born confidant Joanna (Kate Winslet) who always tries to steer him correctly down the path of both success and community.

The camera-work, done by Alwin Kuchler does a lot of what made Innaritu and Lubezki’s Birdman so amazing. They use the camera-work, fast-paced dialogue, and quick zips around corners and hallways to express the urgency of Jobs and the frantic and confused feelings of his employees. The film attempts to be explosive in this right, and clearly succeeds, but it also upgrades the quality of film (from 16mm to 35mm to digital) to show the technological progress of the company.

The main powerhouse performances come from Fassbender himself, who is brilliant and offers a career-best performance as Jobs, finding the intricacies of his personal feelings and his standoffishness because of an apparent God-complex. Other than that, its really three other supporting roles that aid Fassbender’s lead. Kate Winslet is brilliant as the emotional conscience of this film, Jeff Daniels is powerful in a few scenes with Jobs as an apparent father figure, and Michael Stuhlbarg comes out of nowhere to add a dimension to this film’s third act that was such a surprise. Steve Jobs has masterful acting and when placed in the hands of people like Boyle and Sorkin, they get the most out of the material and provide an urgency and energy to the script.

While not as dour and brooding as Sicario or Black Mass but not as bonkers as a Mad Max: Fury Road or Jurassic World, Steve Jobs finds its place between entertainment and art, and delivers a punch that is clearly one of the best of the year so far.