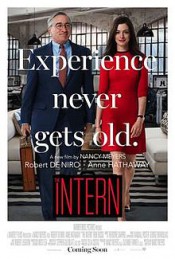 Nancy Meyers crafts a special kind of world in her films, one where conflict exists, but barely changes its characters’ personalities, and where every throw pillow and perfectly designed kitchen builds into this idea of absolute peacefulness, a quality that Meyers takes very seriously in her films.

It’s less about the plot or the overarching story, but instead about the intimacy of the characters, a constant conversation about life and about generational divides, certain attitudes and the like. The Intern is a cute example of this. Sure, it’s a feel-good movie without much of a driving center, but Nancy Meyers creates a wonderful New York atmosphere of silly youth and experienced adults, a cut-out of a perfect day at the office and a perfect friendship among contemporaries. Films are so intent on being either challenging or unique or boundary-pushing that it is a little refreshing to see a movie that is only intent on being enjoyable, nothing else.

Ben Whittaker (Robert DeNiro) is a widower that is trying to fill the hole of being alone and in retirement. He does his daily Starbucks run, practices Tai Chi in the park, and tries his best to stay fit and busy.

Jules Ostin (Anne Hathaway) is a thirty-ish entrepreneur who has formed her own successful clothing line, intent on perfect fittings and speedy service on an online platform. She may make decent money and practice being a living embodiment of the career woman, but at home, things aren’t as easy for her. Her husband (Anders Holm) has become a restless stay-at-home-Dad and the priority of work over domestic life has hurt the productivity of their marriage.

So in comes Robert DeNiro, as he applies to the plot device, I mean ‘senior internship program’ where seniors-in-life get to lend their years of wisdom to this young start-up company. DeNiro is a fan favorite, being a strong businessman most of his life, wearing a tailored suit and warm smile. As he becomes a personal assistant to Jules, their friendship blooms, with her getting the much needed stability needed in her work-place environment. There are some comedic cameos and bit parts for Rene Russo, Adam Devine, Andrew Rannells, Zack Pearlman, and Nat Wolff.

The tone of this film is completely positively-skewed. Large-scale situations remain intimate under the characters and the constant pressures of the workplace are warmed over by DeNiro’s charm. Like the houses in this film, the workplace is the perfect pseudo-warehouse look, with just enough of an Urban Outfitters charm that the audience can associate the visuals with the kind of clothes that they sell. As Hathaway’s responsibilities get more complicated, she is pushed to hire a formal CEO, to aid investors and employees as well. At a breaking point, she needs a friend, and DeNiro accomplishes that for her, a shoulder to lean on as family and work troubles begin to consume her days.

DeNiro is fairly toothless in this film, and the long string of hardened, mobster DeNiro is broken by a sweet, Grandpa-like, old-man performances. He makes a joke that he is like everyone’s uncle in this film, and we agree. He’s a sweetheart, and his steadfastness and absolute loyalty to Anne Hathaway show his work commitment that comes from another time, the suit, the handkerchief, the interpersonal communication skills, etc. His chemistry with her is great, and this film is sweet, funny, and a very enjoyable two hours. It’s fairly average in technicality, but very good in rewatchability. This is the kind of film that you watch on the couch on loop when you’re sick with the flu and need something sultry and sweet.