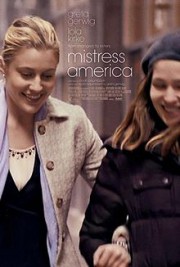 Writer/Director Noah Baumbach has a fleeting style to all of his films, as if every person involved in them took several adderall before leaping into scenes entirely unprepared with only brief character synopses and a few slightly clever one-liners to deliver as the course of the movie takes hold. His style is emblematic of a wider movement in Indie filmmaking, the focus of young, post-modern, progressive thinking packed into a flighty, yet observant, lead actor who floats from scene to scene delivering a mess of liberal cliches, literary and artistic opinions, and societal implications in a backdrop of the hipster capital of the world: New York City.

These New York indies have become so inconsistent in their quality because they so easily impress brain-dead film writers who leap at the chance to sound intelligent by jumping into the blue cable-car, riding into the sunset of unoriginal thinking. Baumbach panders to these politically correct, apologetic zombies, and Mistress America is a pretentious movie for pretentious fools.

Tracy (Lola Kirke) is a young college freshman who seems not to be interested in living the normal college life. Her days are not dictated by social interaction, but rather by her writing, focusing mainly on gaining acceptance into a prestigious literary society at Barnard College in New York. After a rejection, where her one friend Tony (Michael Shear) and his girlfriend Nicolette (Jasmine Cephas Jones) have also been denied, she decides to begin focusing her writing on a single subject, her soon-to-be sister-in-law Brooke (Greta Gerwig), a complete landfill of hipster normality and ex-partygirl fantasy. With Tracy’s mom marrying Brooke’s dad, they decide to meet and hang out, eventually carving out a friendship; Tracy using Brooke for literary inspiration and for a rare friendship, with Brooke using Tracy’s steadfastness to pursue various economic pursuits that have little chance of panning out.  Their journey together comes to a crash-landing when the finale of the film takes place in her ex-fiancee’s (Michael Chernus) house with his new wife (Heather Lind).

Much of the film follows Tracy’s point-of-view, as we only see Brooke when she’s with Tracy, and although her character is immensely hateable, young Lola Kirke does a decent job acting the part. She is a well-educated, snobby literary student who looks down at everyone around her, including Brooke. She refuses to adapt any sort of growth as the film goes on except to develop a fascination and friendship with Brooke, one that is inconsistent with the way she writes about her. It’s as if Tracy is the film looking down at the rest of us from her fancy New York dorm-room, with Baumbach at the forefront shaming us for not being part of his clique-y, indie nonsense.

Brooke herself is a likeable enough character, and Greta Gerwig has proven herself in other Baumbach movies to be a very powerful performer when needed. Because the plot of this film is so thin, mostly relying on nights of extended activity between Tracy and Brooke, any character development is left aside instead for a more satirical or political message that the film throws at you in waves. Like many in its pretentious New-York subgenre, Mistress America plays less like a comedy and more like stylized mania, coming at you full force like a typhoon only to die and hit the beach with a wave that never touches your feet. As an audience member, you are a mere casual observer, watching actors (not characters) jump in and out of scenes delivering one unfunny line before darting back out until the script calls for another moment of the same. It plays like an ode to the classic French farce or 70s American comedy, but never reaches a level of either satire or hysterics that would warrant such a distracting filmmaking style. As each non-sequitur is thrown at you like a large stone, the film feels longer and longer, dragging the 85 minutes into an extremely long and almost unbearable experience.

Even if the writing is heavy and the characters aren’t developed, if the film was actually funny and satirical, it would be worth recommending because of how committed to these parts Lola Kirke and Greta Gerwig are. The ‘verbal diarrhea’ or ‘word salad’ approach is fine in a sillier context, it’s not fine when they just toss out abortion jokes or social media jokes, or something that South Park wrote six years ago. Like Seth MacFarlane’s recent material, it feels like Baumbach is thrusting his ideology in our face when it’s something we’ve already accepted before he needed to tell us. Writing a ton of lines doesn’t make them any funnier. After Gerwig has her 25th drink at the 9th place they’ve visited that night in the wonderful New York backdrop that isn’t shown with any specific flair, we wonder if Baumbach himself wrote this after having a few too many.