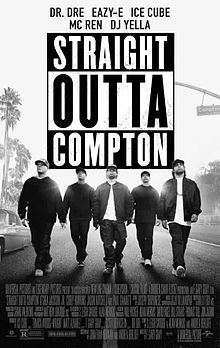 Ethan: If there was ever a group that would make an interesting biopic, it’s NWA. Frankly, they are arguably the most influential group, regardless of genre, of the past 45 years, and more than that, contain some of the most unique and recognizable  personalities rap music has ever seen. Ice Cube is a worldwide celebrity due to his film and music career, Dr. Dre is one of music’s richest figures, and Eazy-E is one of hip-hop’s fallen angels. To add on top of that, there was, and still is, massive controversy surrounding the group, tons of important music, and a dramatic breakup to boot. Naturally, if done right, this all would make for a great movie. And due to the expert care, precision, and respect this film was made with, it is.

To begin, from a musical standpoint, “Straight Outta Compton” pretty much nails it. It perfectly encapsulates the anger and frustration that fueled the group’s landmark debut, and also captures the way in which it was made extremely intimately. For someone like myself who is a huge hip-hop fan, it was just great to see the history of the group play out from a musical perspective. You hear the recording sessions of songs like “Fuck Da Police”, “Express Yourself”, and “Gangsta Gangsta”. You see the beef play out between Ice Cube and NWA after he left the group, which culminates in Cube eviscerating his former group members with “No Vaseline”. You see how Dre made “Nuthin’ But A G Thang” with Snoop Dogg. You even see Tupac record “California Love” with Dr. Dre. I said this about another great movie this year, “Dope”, which featured a great hip-hop soundtrack and was extremely indebted to the music and the culture in its aesthetic and in its dialogue: this movie is like hip-hop head porn. It’s just wonderful to see some of your favorite songs and some of the the most iconic moments be discussed and acted out with such respect. However, one thing loomed over the film like a dark cloud, the lack of MC Ren. Of course, everybody expected this; he is one of the criminally underrated rappers ever, and is not nearly as famous as Dre, Ice Cube, or Eazy-E. But he is barely in the movie and really only serves a minor character that is thrown some dialogue to remind you he is there, but anyone who knows anything about NWA knows how pivotal he was to the group. When Ice Cube left Ren was left with much of the lyrical and rapping responsibility, and absolutely rose to the occasion, proving himself a very important part in making “Efil4zaggin” a pretty great album. I’m not saying Ren should have been the star of the show; of course he is going to have to take a back seat to the more famous members of the group, but he should have been featured way, way more. Despite this though, from a historical and musical point of view, “Straight Outta Compton” comes through with both a movie that can educate the uninitiated, but also provide endless entertainment for fans of NWA and hip-hop in general. Of course, none of this would mean anything if the film itself wasn’t handled properly, but from that aspect it is actually close to perfect.

The three main stars of the show, O’Shea Jackson, Jr. (Ice Cube’s son playing his father), Corey Hawkins (Dr. Dre), and Jason Mitchell (Eazy-E), absolutely knock it out of the park. Coming from relative nobodies these three give breathtaking performances. Luckily, the film makers knew that it was not enough for the actors to just look like the figures they are playing, but that you have to care about them as movie characters. From the instant you meet these three you are given their backstories, reasons to care for them, what their hopes and dreams are, etc. It gets to a point where you are not just sitting there thinking you are merely watching a movie about NWA, but you are witnessing the stories of fleshed out characters that happen to be iconic figures in pop culture. I also have to give a shout out to Paul Giamatti, who plays the role of their manager, Jerry Heller, and he absolutely kills it. I honestly think a Best Supporting Actor nomination is in order for this man. Every emotion, every nuance in the role is so refined, and truthfully, awards nominations may be in order for Jackson, Hawkins, Mitchell, and Giamatti, especially in a year like this. None of them played their roles saying “hey look at me I’m an actor”, and instead played their roles with such passion, raw energy, and such a high level of natural chemistry with each other that you can’t help but get wrapped up in the film.

Put simply, “Straight Outta Compton” is an exhilarating experience. The film is made with tons of dedication to the culture NWA is such a pivotal part of, and expertly pays tribute to the careers of artists who have changed the way we think about and listen to (Beats By Dre™) music. While the criminal lack of MC Ren did hold this movie back from being absolutely perfect, this film comes damn close to being flawless, which is especially amazing given the fact that it is dealing with three very different and important personalities. Any one of these guys would make for an interesting biopic by themselves, but “Straight Outta Compton” gives you the stories of all three and brings them together for a fantastic piece of art. Kinda like the album it is named after.

Matt: This film is mostly important based on its timing, rather than any blatant historical biopic that goes more for actor showcase or sentimentality. Here, Dre and Cube, now both around 50, have returned to NWA for a similar reason as starting it. They see the obvious problems and obvious discrimination going on in the news, and have decided to reboot the sleeping dragon of hidden, angry lyrical genius in NWA. It’s effective, and to have our characters sing stuff about prejudiced police forces or lack of equality in society, well, it may still ring true today. It’d be hard to imagine this film not at least acknowledging how important NWA’s legacy could be even for today’s teens, a similar sentiment is shared by Kendrick Lamar’s ‘To Pimp a Butterfly,’ a clear attack at some similar things that NWA started rapping about over 30 years ago.

As far as performances, none really stand-out except for Giamatti, who does his bad-guy supporting work very similar to what he did in this year’s Love and Mercy as well. He’s had a big year so far, and he could get some acclaim for either movie come awards’ season time. Jackson, Hawkins, and Mitchell all carry their roles very well, and very close to the chest, but they fit into the larger picture. Their performances are just a piece to the larger puzzle that is this movie, and they work excellently.

Finally, to sum up, the other thing the film really nails is the music. There’s a sense of respect to classic hip-hop and the timeline of it, showing the influence of our main artists in regards to the mainstream. After NWA begins to faction, artists like Snoop, Tupac, and then producer Sugg Knight shows up, only to complicate matters. The history of it matters, as does the attempt to make the music as good as possible. Scenes of the actors ‘recording’ the music are spliced with an excellent, excellent soundtrack that becomes the forefront once the background kicks in. These scenes of making music are handled very well and with respect for the material. If the music is good, the image is good, and the background for the biopic is good, the movie itself is going to be good.