Film Review: “Before I Fall” 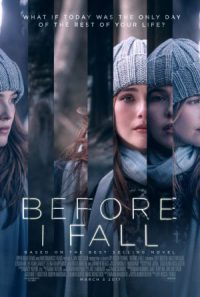 -Emotionally manipulative and immeasurably melodramatic, Before I Fall stands out from the teen drama pack with a powerful story and surprisingly effective performances.

After some buzz at Sundance with decently good reviews and a loyal book following, the YA adaptation of Before I Fall was released on American screens this weekend, driven entirely by an independent director and an up-and-coming star that needed a leading role breakthrough into the mainstream.

If you’ve read my reviews before, you may have been aware that I am becoming a big fan of young actress Zoey Deutch, who charmed everyone in Richard Linklater’s Everybody Wants Some a year ago, and got some exposure as a supporting player in the Christmas comedy Why Him? alongside Bryan Cranston and James Franco. She appears to have star potential and landed a few big roles in Independent projects that will be trickling out this year after being shown at different film festivals. Regardless of how this type of material affects the viewer, there’s an objective truth to Before I Fall; that Deutch’s lead performance is powerful and commendable, and anchors a pretty unsteady film into respectable territory with nuance and a wide range of emotional malleability.

Now I haven’t read the book, so I’m unaware of any main plot differences so here’s how the movie presented it:

Sam Kingston (Deutch) is living the dream of a high school life. She runs in a popular clique of girls, led by the ferocious Lindsay (Halston Sage), and side by side with the goofy Elody (Medalion Rahimi), and the party girl Allison (Cynthy Wu). Together, the four of them make up the meanest collection of girls in the school, picking on different targets for being different or eccentric, like the volatile Juliet (Elena Kampouris). Blessed with gorgeous looks and a screw-it attitude towards school, Sam is going through the senior year peak, and today is ‘cupid day’ where all of the popular girls get roses from secret admirers, ooooh.

One night, a friend/classmate of hers (Logan Miller, who she has friend-zoned hard) invites her and her friends to a rager that he’s throwing with his parents out of town. Sam’s jock boyfriend Rob (Kian Lawley) will be there, and they agree. Things quickly get out of hand, Juliet gets bullied, and on the way home that night, her and her friends’ car crashes, seemingly causing her death. When she wakes up the next morning, she realizes that her day has reset, and she begins living this same day over and over again.

As time goes on, Sam must decide whether to make some pretty permanent changes in her life.

The most pressing compliment I can give this movie is actually the lead performance from Deutch that I alluded to above. On first look, it seems like just another pouty exercise of teen angst, but what she brings to the character is so much more than that. As we go through the same day over and over, it seems that Sam is experiencing the five stages of grief as she learns to accept her fate and her scenario. She goes through denial, and trudges through her day as a misfit, she goes through anger, bargaining, and depression in a few scenes of some surprising behavior, and then eventually through acceptance, as she takes control of her situation. Despite each day being seemingly the same, Deutch brings a different style and attitude to the same backdrop on multiple occasions, switching from a popular ‘mean girl’ to a radically promiscuous ‘don’t give a shit’ mindset to a loving, nurturing family person, and in her last day, tries to mend the damage she’s caused her Mom (Jennifer Beals), Dad (Nicholas Lea), and little sister (Erica Tremblay). It’s these wide ranges of emotion that makes this performance special, and one of the best in any teen movie you can remember.

There’s other pieces that elevate Before I Fall above the traditional teen drama. First, the other performances from the other teen actors are all solid. There isn’t really a weak link in this movie, which is refreshing. Further, the backdrop of a Pacific Northwest neighborhood gives the film a very crisp and sodden feel that is rarely replicated. It’s framed gorgeously, and Russo-Young makes sure to incorporate the environment of moist trees and gorgeous wooden homes into the plot. I don’t want to inadvertently compare it to Twilight, but some of the scenery is very similar.

As Sam begins to figure herself out and make better decisions, we as audience members begin to respect her much more. We acknowledge that she’s clearly gorgeous and smart, but when she starts to show her side of humanity, we begin rooting for her about as harshly as we can. It’s hard to watch the end because the way the movie concludes is the correct choice for how the plot develops, but it is a sad ending, and it could be a divisive one depending on who’s watching. I just can’t, in good faith, talk about this movie without acknowledging the truth: I love this movie, and it stuck with me long after the conclusion. Regardless of age, it’s the kind of film that sticks with you. A small percentage of that carry-over is because we’ve all been through high school and experienced those awkward moments, but if that was the logic, every teen movie ever would be special. Instead, it’s the forceful message about being a better person and acknowledging the butterfly effect, that your actions affect others in a way that you may not immediately understand. All in all, I could see this becoming a movie that more people see as a rental than necessarily in theaters, but I think it’s one that more people should see; partly because of the message and how correctly it interprets the teen existence, and also partly because of Zoey Deutch, who works her way through these complicated emotions with grace and fluidity. This is a surprisingly special movie, and another surprise hit of 2017.

2 thoughts on “Film Review: “Before I Fall””